The Shakespeare Thefts: In Search of the First Folios 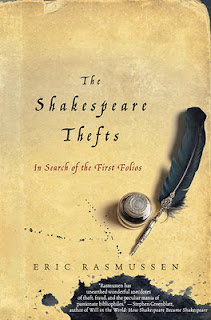 The book known as the First Folio, the first edition of the collected works of William Shakespeare, was put together by his fellow actors after Shakespeare's death. From the moment the original 750-copy print run left the press, it's been one of the most coveted books ever published -- treasured by kings, billionaires, and bibliophiles the world over.

The Shakespeare Thefts is the account of a renowned Shakespeare scholar's attempt to track down every existing copy of the book (232 are known), and to identify other copies that have been lost or stolen. Rasmussen and his team of literary detectives traveled the globe and spent more than a decade in their effort to "make the First Folio the most documented book of all time." A daunting task, to be sure; and one that certainly appeals to the lit-geek in me. Along the way, they encountered thieves, eccentric book collectors, reclusive librarians, as well as academics and historians, aristocrats and theater people -- all in some way mixed up in the story of one of the world's most sought-after books.

The Shakespeare Thefts was interesting enough, and a fast read; I enjoyed it, even though I was never exactly swept away by the narrative. An awful lot of detail to take in, for such a relatively short book -- occasionally I felt like I was slipping into info overload syndrome. Probably not a book for everyone, but if you're interested in Shakespeare scholarship or theater history or rare book collecting, this should be right up your street.

Note: I received my copy of this book free of charge from the publisher, through Library Thing's Early Reviewer program. No other compensation was provided, and no one attempted to influence my opinion of the book.
Posted by JLS Hall at 12:53 PM