Well, Halloween has come and gone and I've definitely learned my lesson this year. No more trick-or-treating at our place, I'm afraid.

This year we had exactly 11 trick-or-treaters, down from about 17 last year and a whopping 24 the year before. I always enjoy handing out the treats and getting to see all the kiddoes in their costumes, but an abundance of leftover candy is not something I want to deal with. The M&Ms are OK – they won't go to waste. But I just can't say the same thing about all those gummie treats.

And speaking of Halloween costumes, there was an interesting article in the Washington Post the other day ("Preteens Trading Fairy Wands for Fishnets"). Apparently the new trend in Halloween attire, for girls anyway, involves miniskirts, bare midriffs, and fishnet stockings. And not just for pre-teens – sexy costumes are being made in sizes to fit 5- and 6-year-olds. The costumes have names like "Sexy Super Girl," "Playboy Racy Referee," "Funky Punk Pirate," and "Fairy-Licious Purrfect Kitty."

OK, I have to say it: What's the world coming to? I feel like I fell off the sled back there, about 500 years ago. Whatever happened to clowns and ghosts and hobos?

Well, almost all our trick-or-treaters this year were girls. But none of them looked particularly racy, thank goodness. Even the vampire craze of the last few years seems to have waned. This year they were mostly princesses of one sort or another. And the only short skirt was a pink tutu on a four-year-old ballerina.

I think the closest I ever came to a sexy costume when I was a kid was when I was about eleven or twelve and dressed up as a gypsy. I wore one of my aunt's old peasant skirts and a lot of her costume jewelry. I tied a scarf around my head and wore lipstick, too – possibly for the first time. I thought I looked tremendously exotic.

Of course, the whole effect was completely spoiled when the weather that year turned cool and damp, and my mother insisted I cover everything up with a very un-exotic wool cardigan. So even if I had been sporting a bare belly button or leather bustier, no one would have known it. 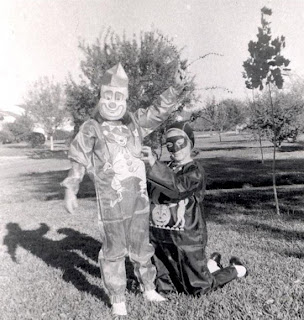 Generally, my Halloween costumes were less elaborate, store-bought (probably flammable) outfits like those in the photo here, circa 1956 or so. The one in the clown mask is my cousin. I'm in the cat costume, sharpening my claws on her 6-year-old body.
Posted by jlshall at 6:51 PM 1 comment: