I've been neglecting my blog again. Shame on me. Real life keeps getting in the way. Amazing how it does that sometimes.

M. and I spent last weekend visiting Colonial Williamsburg. After living in Virginia for over 20 years, I thought it was time we made the pilgrimage. We've been planning a trip for years, but always managed to talk ourselves out of it at the last minute. 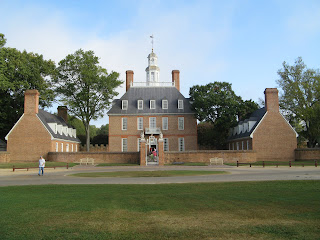 M. has never been particularly enthusiastic about the place. I think he was afraid the staff (the "reenactors"?) would try to jolly him into participating in some of their merry activities – sort of like a cross between an over-zealous social director on a cruise ship, and one of those creatures who roam Disney World dressed up like Mickey or Pluto or Snow White.

But his worries turned out to be unnecessary. The inhabitants of the Historic Area go about their daily routine, wearing their 18th Century garb, pretty much ignoring the tourists unless the tourists interact with them. The closest we came to being forced to perform or party was when one of the tour guides demonstrated bows and curtsies and asked us all to try "bending the knee." 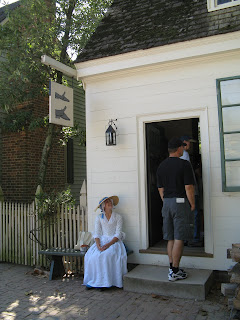 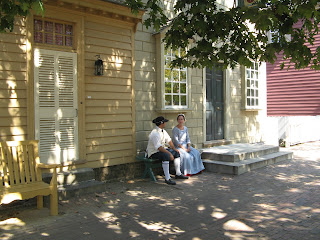 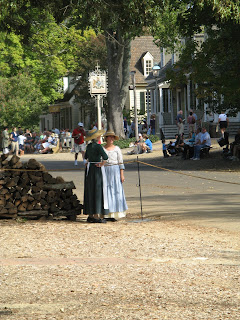 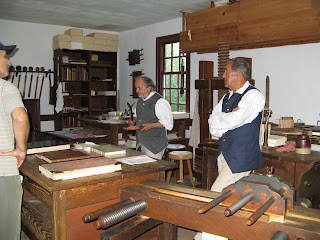 My first destination was the print shop and book bindery, across the sidewalk from one another, and just in back of the post office. Both turned out to be very interesting, as expected. The master binder even had a very authentic British-American accent and a slightly superior air. I was surprised to learn that book binders in the Colonies would have made most of their money by selling blank books, for record-keeping. Also learned they didn't produce most of their own paper, but instead imported it from England. On reflection, of course, that makes sense – the paper was made from rags (i.e., old clothing) and the Colonists didn't have a lot of those to spare. 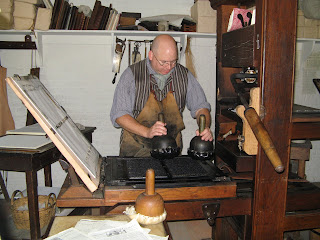 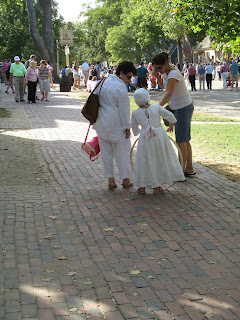 All in all, it turned out to be a very pleasant, educational trip. Lots of walking, though – in August heat, although we were there in October. I would definitely recommend wearing comfortable shoes and taking the shuttle to and from the Visitors' Center. The Center is a huge modern complex of buildings with air conditioning and gift shops and rest rooms, and has a rental shop where kids can get themselves all kitted out in 18th Century gear. And the sight of all the little ones running around looking like refugees from an American Girl Doll catalog turned out to be one of the most memorable (and adorable) parts of the experience.

What a nice surprise – Doris Lessing has won the Nobel Prize for Literature. Finally someone I've actually read! But it's been more than twenty years since I discovered Martha Quest and The Summer Before the Dark. Never got around to The Golden Notebook, so maybe I'll put it on my Autumn reading list.

And I suppose Al Gore was a natural choice, after "An Inconvenient Truth" caused such a sensation. Now if he'd just come down out of his splendid tower and RUN!
Posted by jlshall at 6:50 AM No comments: