Book Beginnings: Murder in the Meadow 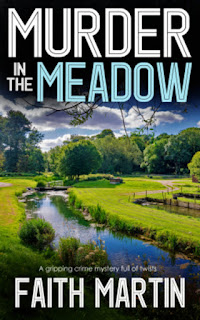 Murder in the Meadow, by Faith Martin (Joffe Books, January 2018; first published 2008). No. 7 in Martin's DI Hillary Greene series. These are the first sentences from Chapter One:


May Day that year dawned bright and hot, just the kind of weather to encourage the idiots who liked to throw themselves off Magdalen Bridge as part of the traditional May Day celebrations. In Oxford, uniformed police watched them and shook their heads, whilst the media cheered them on.


"When Wayne Sutton's body is found in a beautiful summer meadow, his head bashed in and a red paper heart left on his body, DI Hillary Greene isn't surprised to learn that the handsome young artist had a reputation as a heartless Casanova. Moreover, it appears that there were numerous middle-aged, married and wealthy women buying his canvases with reason enough for wanting him dead. But, delving deeper into this case of cold-blooded murder, she finds that all is not what it seems. Worse still, her new Detective Sergeant, although pleasant and efficient, has a secret agenda." (--Goodreads)

Actually, my first thought was that I really like the word "whilst." Why don't we Americans use it more? Also, Oxford is one of my favorite cities, although I haven't been there in many years, so the setting is a definite attraction.

I've read about a third of this one and I'm really enjoying it so far. I might have to go back and read some of the earlier books in the series. Not that I really need to get myself stuck into yet another series, but.... 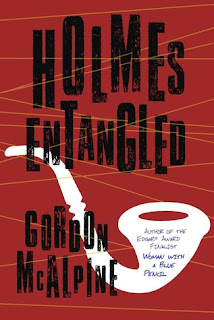 Holmes Entangled, by Gordon McAlpine (Seventh Street Books, March 2018). These are the first lines from the book's Prologue:


Buenos Aires, Argentina, 1943
Sr. J.L. Borges, 44, has completed his shift at the ill-organized Miguel Cané Municipal Library near the city center, where he works as first assistant.


Sherlock Holmes, now in his seventies, retired from investigations and peaceably disguised as a professor at Cambridge, is shaken when a modestly successful author in his late-sixties named Arthur Conan Doyle calls upon him at the university. This Conan Doyle, notable for historical adventure stories, science fiction, and a three-volume history of the Boer War (but no detective tales), somehow knows of the false professor’s true identity and pleads for investigative assistance. Someone is trying to kill Conan Doyle. Who? Why? Good questions, but what intrigues Holmes most is how the “middling scribbler” ascertained Holmes’s identity in the first place, despite the detective’s perfect disguise. Holmes takes the case.

There is danger every step of the way. Great powers want the investigation quashed. But with the assistance of Dr. Watson’s widow, Holmes persists, exploring séances, the esoterica of Edgar Allan Poe, the revolutionary new science of quantum mechanics, and his own long-denied sense of loss and solitude.

Ultimately, even Sherlock Holmes is unprepared for what the evidence suggests.

Well, I have to admit that's not the most thrilling of openings. But a book about Sherlock Holmes, libraries, séances, Edgar Allan Poe, and Jorge Luis Borges definitely gets my interest up. Looking forward to getting started on this one. 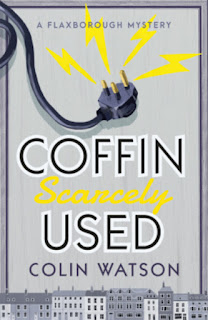 Coffin, Scarcely Used, by Colin Watson (first published 1958). First book in Watson's series of Flaxborough mysteries. This is the first paragraph of Chapter One:


Considering that Mr Harold Carobleat had been in his time a town councillor of Flaxborough, a justice of the peace, a committeeman of the Unionist Club, and, reputedly, the owner of the town's first television aerial, his funeral was an uninspiring affair.

How were the dead men connected, both to each other and to a small but select band of other town worthies? Purbright becomes intrigued by a stream of advertisements Gwill was putting in the Citizen, for some very oddly named antique items… (--NetGalley)

Well, I think a funeral (even an uninspiring one) is a fine way to start a mystery novel, so I'm immediately intrigued. This is my introduction to Watson's series of Flaxborough novels featuring Inspector Purbright. It's sort of unusual for me to start at the beginning -- I usually jump in about midway through a series. I'm halfway through this first book, and I think I'm hooked. Purbright is a wonderful creation.

So, what do you think? Does this sound like something you'd keep reading? Or maybe you've already discovered Flaxborough and Purbright and all those quirky characters?