Book Beginnings: A Fragment of Fear 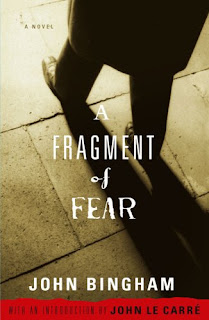 A Fragment of Fear, by John Bingham (first published 1965). First paragraph of Chapter 1:


We live in a dangerous age, and this is not only because of the hydrogen bomb and high taxation.


"James Compton, a young journalist and crime writer, becomes intrigued by, and then involved in, the mysterious death of an older British woman tourist apparently on holiday near the ruins of Pompeii. On his return to England he becomes further implicated in what he now knows was a murder, but his efforts to help the police are sabotaged by unknown forces who discredit him to such an extent that his evidence and his theories are devalued. However, so determined is he to bring the criminals to justice that he endangers not only his own life but that of his fiancee Juliet on the very day of their long awaited wedding." (–GoodReads)

Well, my first thought was something about how very, very true that opening line is — especially with all the craziness we're living through at this moment in time. I guess every era has its dangers, but some just seem more frightening than others. And make you feel extremely helpless. But fortunately, this book has kept me nicely distracted from current events, at least for a while.

Have a good weekend, everyone. Stay safe. Stay calm. And happy reading! 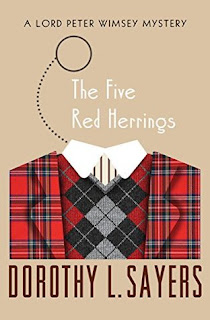 The Five Red Herrings, by Dorothy L. Sayers (first published 1931). These are the book's opening lines:


If one lives in Galloway, one either fishes or paints. 'Either' is perhaps misleading, for most of the painters are fishers also in their spare time. To be neither of these things is considered odd and almost eccentric.


"The body was on the pointed rocks alongside the stream. The artist might have fallen from the cliff where he was painting, but there are too many suspicious elements — particularly the medical evidence that proves he'd been dead nearly half a day, though eyewitnesses had seen him alive a scant hour earlier. And then there are the six prime suspects — all of them artists, all of whom wished him dead. Five are red herrings, but one has created a masterpiece of murder that baffles everyone, including Lord Peter Wimsey."

The Five Red Herrings is one of the few Lord Peter Wimsey mysteries I've never read. It's been on my must-read list for decades now, and one of my 2020 reading challenges finally gave me the nudge I needed to get started on it.

I love Lord Peter, and he's up to his usual form in this one. But I'm having a really hard time getting through all the Scottish dialect in the book. It's definitely slowing me down. Will I be able to stick with it long enough to finish? Och! A dinnae ken.