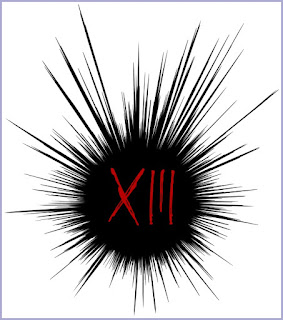 It's that time of year. September is almost here, and with September comes one of my favorite traditions of autumn, the RIP (for Readers Imbibing Peril) reading event/challenge. This is the 13th year for RIP -- I think this will be my 10th year as a participant. The challenge begins September 1st and runs until (fittingly) Halloween on October 31st.

RIP was the brainchild of Carl Anderson, over at his Stainless Steel Droppings blog, and last year was handed over to new hosts. This year it's being hosted by Heather from My Capricious Life, and has its very own website, where you can read all about it and join up.

The purpose of the event is to read books that fall into any of the RIP categories:

And the main goals are to HAVE FUN, and to share that fun with others. Pretty simple.

Actually, it's not that much of a challenge for me -- those are the genres I read most of the time. But RIP always manages to renew my reading spirits after they've started sagging during the summer. Also helps me find new books I might be interested in. I'll be signing up at the Peril the First level (read four books), and combining that with Peril on the Screen (and possibly Peril of the Short Story, too).

To find out about the various Peril levels, and to sign up, visit the challenge announcement page HERE. I don't really have a set list of books I intend to read, so I'll just see what I come up with. And I'll be tracking my progress over on my challenge blog (HERE). 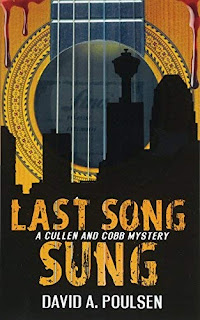 Last Song Sung, by David A. Poulsen (Dundurn, May 2018). Third book in Poulsen's Cullen and Cobb mystery series. These are the book's first lines:

The cigarette smoke stung her eyes. She threw the cigarette down, regretted it right away — hated to do that to a Lucky Strike, damn good smokes — and looked around.


Former newspaper journalist Adam Cullen and private investigator Mike Cobb are back to look into the 1965 disappearance of a folk singer. Kidnapped from the alley behind a Canadian folk club, her bandmates shot and killed, Ellie Foster’s whereabouts have remained a mystery for fifty years. Hired by Ellie’s granddaughter, Cullen and Cobb travel into the past to unearth long-buried secrets.

This is a new series for me — and once again, I'm jumping into a series without having read any of the early books. So far, though, I don't feel too lost and I'm enjoying getting to know Cullen and Cobb. I was originally attracted to this one because of the 1960s folk music aspect, and because the Joni mentioned in the quote was supposed to be Joni Anderson, later known as Joni Mitchell. And Joni Mitchell was always one of my favorite singers back in the day. Well, still is in this day, too.

For some reason, I've had trouble getting going on this. Started it twice before and got sidetracked by other books both times. Not the book's fault — I've just been having trouble staying focused this summer. Hoping I'll do better on this third attempt. 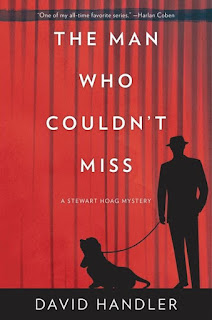 The Man Who Couldn't Miss, by David Handler (William Morrow, August 14, 2018). This is the 10th book in Handler's Stewart Hoag mystery series. This is the book's opening sentence:


His voice on the phone was booming and authoritative, especially for five thirty in the morning.

(The quote is from an ARC of the book, so please remember the published edition might have some changes.)


The Man Who Couldn't Miss, the tenth novel in David Handler's beloved Edgar-winning series, finds celebrity ghostwriter Stewart "Hoagy" Hoag in Connecticut, where his ex-wife, Oscar-winning actress Merilee Nash, is directing a stage production to benefit a local theater. But when one among the starry cast is found murdered, it's up to Hoagy — accompanied by his faithful and cowardly basset hound Lulu — to unmask the killer.

My first thought is that if anyone called me at 5:30 A.M., I'd assume somebody had died. But I guess that's a fitting assumption for the beginning of a mystery novel.

I've read one other book in this series — last year's The Girl with Kaleidoscope Eyes — and really enjoyed it. "Hoagy" Hoag is witty and smart and sort of snarky and just a very charming amateur sleuth. And his faithful sidekick Lulu is fun too — well, mostly faithful anyway. Looking forward to this one.

I know — instead of looking ahead at all the books due to be published in the next few months, I really should just get on with reading the ones I've got now. But I always like to keep an eye on what's going to be coming out next season. These are a few that sound interesting and I want to remember to look for them when they become available. So I made a little list — not that it's likely I'll be reading ALL of them...but you never know.

(The publishing info on all of these is from Publishers Weekly.)

Before We Were Strangers, by Brenda Novak (Dec. 4, Mira, trade paper, $15.99, ISBN 978-0-7783-6994-3). When she was five, Sloane McBride’s mother disappeared. The official story is she left. But adult Sloane fears her domineering father isn’t just a difficult person, but something worse. Another traumatic loss makes Sloane realize she owes it to her mother to discover the truth.

The Clockmaker’s Daughter, by Kate Morton (Oct. 9, Atria, hardcover, $28, ISBN 978-1-4516-4939-0). A group of young artists arrives at Birchwood Manor in rural Oxfordshire in the summer of 1862, planning to use the seclusion for artistic inspiration. By the end of the summer, one of them is dead and another has disappeared. Over a century later, a London archivist discovers a leather satchel with connections to Birchwood Manor.

Daughters of the Lake, by Wendy Webb (Nov. 1, Lake Union, hardcover, $24.95, ISBN 978-1-5039-0082-0). After the end of her marriage, Kate Granger retreats to her parents’ home on Lake Superior—only to discover the body of a murdered woman, whom Kate recognizes from her dreams. As Kate is drawn into a 100-year-old tragedy, she promises to right the wrongs of the past.

I Am Behind You, by John Ajvide Lindqvist (Oct. 16, St. Martin's, hardcover, $27.99, ISBN 978-1-250-08657-0). Four families wake up one morning in their trailer on an ordinary campsite—but everything outside the camping grounds has disappeared. As the holiday-makers try to come to terms with what has happened, they are forced to confront their deepest fears and secret desires.

In the Night Wood, by Dale Bailey (Oct. 9, HMH/Adams, hardcover, $23, ISBN 978-1-328-49443-6). In this contemporary fantasy, the grieving biographer of a Victorian fantasist finds himself slipping inexorably into the supernatural world that consumed his subject.

Killing Commendatore, by Haruki Murakami, trans. by Philip Gabriel and Ted Goossen (Oct. 9, Knopf, hardcover, $30, ISBN 978-0-525-52004-7). Murakami’s first novel since Colorless Tsukuru Tazaki and His Years of Pilgrimage is, according to the publisher, a story of “love and loneliness, war and art—as well as a loving homage to The Great Gatsby.”

The Mermaid and Mrs. Hancock, by Imogen Hermes Gowar (Sept. 11, Harper, hardcover, $28.99, ISBN 978-0-06-285995-2). In 1780s London, merchant Jonah Hancock finds overnight fame when he obtains a purported mermaid specimen. Catapulted into the drawing rooms of high society, he meets Angelica Neal, who dares him to bring her another mermaid.

Riddance: Or: The Sybil Joines Vocational School for Ghost Speakers & Hearing-Mouth Children, by Shelley Jackson (Oct. 16, Black Balloon, hardcover, $26, ISBN 978-1-936787-99-9). Eleven-year-old Jane Grandison arrives at the Sybil Joines Vocational School, which claims to cure students’ speech impediments, but secretly has pioneered the field of necrophysics by harnessing the students’ stutters to communicate with the dead.

A Short Film About Disappointment, by Joshua Mattson (Aug. 7, Penguin, hardcover, $25, ISBN 978-0-525-52284-3). A movie critic certain no one reads his reviews fills them with details of his personal life in this sharp, funny PW-starred debut set some time in the future, in America’s Central Hub.

The Third Hotel, by Laura Van Den Berg (Aug. 7, Farrar, Straus and Giroux, hardcover, $25, ISBN 978-0-374-16835-3). Clare, an elevator sales rep, travels to Havana after her horror-film scholar husband, Richard, is killed in a hit-and-run. The couple had planned to attend the Festival of New Latin American Cinema together, specifically to see Cuba’s first horror film. Shortly after arriving at the festival, Clare spies a man from afar who looks exactly like Richard.

Transcription, by Kate Atkinson (Sept. 25, Little, Brown, hardcover, $28, ISBN 978-0-316-17663-7). Initially recruited for her secretarial skills, Juliet Armstrong is drawn into dangerous assignments as an undercover agent for MI5 during WWII. A decade after the war, Juliet, now a radio producer, encounters figures from her past.

Melmoth, by Kate Perry (Oct. 16, Custom House, hardcover $28, ISBN 978-0-062-85639-5). Helen Franklin, a translator living in Prague, finds herself searching for the truth behind the dark, legendary figure Melmoth—while also being pursued by her. Gothic mystery novel from the author of The Essex Serpent.