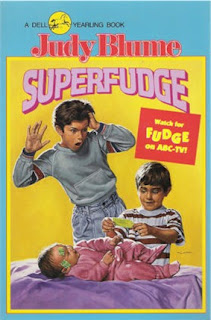 Written by Judy Blume
Published by Dell Yearling, 1994 and later
Originally published 1980
This review refers to the 1994 edition of the book.
Young Readers Challenge

Is Judy Blume still popular? I know she was wildly successful back in the 1970s and ‘80s. But do kids still read her books? She was one of those annoyingly over-achieving children’s book writers who seemed to turn out nothing but best-sellers. And then she started writing books for adults and did OK there, too. See what I mean about annoying?

Since I was already in college when she published her first children’s books and I don’t have kids of my own, I never had occasion to read any of her books until the Young Readers Challenge came along and made me start looking at all the kids’ lit I’ve missed in the last century decade or so.

There’s really no reason why I should have read this particular book. But I’ve been making a conscious effort this year, to read more children’s and young adult books that have boys as the central characters. In the past, I’ve mostly read “girly” books. So when I found this in one of the boxes of kids’ books I’ve got stored away, I thought I’d give it a look.

Get to the point, already!

Superfudge is a sequel to Blume’s earlier book about the Hatcher family, Tales of a Fourth Grade Nothing (which I haven’t read). This second installment is set a couple of years after that first book, and is narrated by Peter Hatcher, older brother of the unfortunately named Farley Drexel Hatcher (hence the nickname “Fudge”) who is four years old when the book begins. Peter is beginning sixth grade, and trying to live as normal a life as it’s possible to live, with a brother like Fudge.

Fudge is the baby of the family, and gets away with murder (almost literally – in the first book he apparently swallowed Peter’s pet turtle alive!). He is wild and uncontrollable, and naturally the apple of his parents’ eyes. No wonder then that Peter is upset when he learns that a new baby sister is on the way (eventually called “Tootsie”) – he’s positive the new sibling will turn out to be just another version of Fudge!

In this story, the family moves to Princeton, New Jersey for a year so that Mrs. Hatcher can go back to school (and have a new baby, too? talk about Supermom!) and Mr. Hatcher can spend some time writing a book. Peter isn’t happy about the move at first, but once he gets there and starts to make new friends, he begins to enjoy the place. The baby comes. Peter has his first mild crush on a girl. The boys have some funny adventures, and Fudge acquires a talking myna bird whose favorite phrase turns out to be “Bonjour, stupid!” It would be a cute story if it weren’t for the constantly infuriating presence of the abominable Fudge.

A couple of things struck me as I was reading this book, and doing a bit of research on it. One thing I found a little surprising is the fact that Blume “outs” Santa in the book. At one point, Peter talks about the fact that he never believed in Santa Claus because he’d seen his parents putting presents under the tree when he was three years old. And he doesn’t agree with his parents’ plan to let Fudge go on believing a little longer, since Fudge “thinks you can get whatever you want by just asking.” I suppose since the book is aimed at the just-pre-middle school crowd, this isn’t a big deal. But if a parent were reading it to a younger child, this might be a nasty shock.

I was also amused to learn that in later editions of the book, some things have been altered to bring the story a little more “up to date.” Christmas “want” lists are changed to reflect the times – records and record players replaced with CDs, etc. And the boys’ favorite TV shows are replaced with 21st Century shows. I suppose that makes sense from a marketing point of view, although I always hate it when history is tampered with that way, even in children’s books. It means missing a great opportunity for kids to learn a little something about the times their parents and grandparents lived through.

In the end, I guess this is just one of those books you’ve gotta be a kid to appreciate. Fudge did not charm me. I did not think he was super. At one point, big brother Peter says to him, “You are the biggest pain ever invented.” Yeah, I’d agree with that.
Posted by jlshall at 9:03 PM

New comments are not allowed.