Booking Through Thursday: Well, That Was Different

What was the most unusual (for you) book you ever read? Either because the book itself was completely from out in left field somewhere, or was a genre you never read, or was the only book available on a long flight… whatever? What (not counting school textbooks, though literature read for classes counts) was furthest outside your usual comfort zone/familiar territory?

And, did you like it? Did it stretch your boundaries? Did you shut it with a shudder the instant you were done? Did it make you think? Have nightmares? Kick off a new obsession?

Well, I guess I’d have to go back to a book I read for a class somewhere, sometime. Because I don’t generally read books “from out in left field.” I’m pretty selective about what I read, and if a book is likely to make me shudder, it’s also probably not likely to be one I’ll read. (Unless it’s a book of ghost stories, in which case I’ll actually be hoping for a few shudders.) 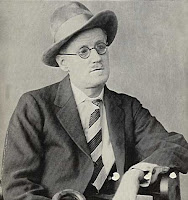 Hmmmm. Well, if we’re talking about works of fiction, I suppose the most unusual book (unusual for me, anyway) I’ve ever read would be James Joyce’s Ulysses. At least, that’s the first one that springs to mind. I had to read it for a college class on the modern English novel, many years ago. And now, of course, I’m glad of it – it’s definitely a modern classic and I think everyone interested in modern literature should read it. But it was a real struggle at the time. No, it didn’t kick off a James Joyce obsession. And it only made me think that I was really glad when I’d finished it. 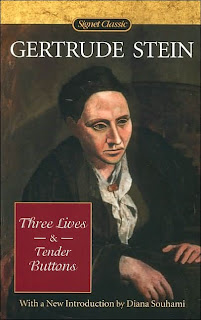 The most unusual book I’ve tried to read but never finished would be Gertrude Stein’s Tender Buttons. The written equivalent of Cubist painting, it’s made up of short pieces supposedly on various subjects such as food, rooms, objects. But reading it is like trying to read a book that’s been chopped up into tiny bits and then had the bits reassembled in random combinations and juxtapositions. I think I understood what Stein was getting at in writing the book, but I finally decided that life is just way too short to spend much of it unraveling her puzzles. A pain is a pain is a pain. . .
Posted by jlshall at 7:55 AM