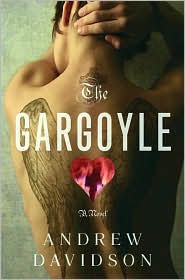 Written by Andrew Davidson
Published by Doubleday, 2008, 468 pages
This review refers to an advance reading copy of the book

Just a short note about The Gargoyle. There’s not a great deal to say about the book that hasn’t already been said, and said again. Unless you’ve been buried in a coal mine for the last few months, or out mapping the migration of the yellow-headed parrot through Ecuador, by now you’ve heard all about Andrew Davidson’s best-selling debut novel.

But if you hang on, you get to the best part of the story. One day, a beautiful and mysterious sculptress of gargoyles appears suddenly at the burn victim’s bedside and begins to tell him tales of their lives as lovers in an earlier incarnation, hundreds of years ago. She insists her stories are true; and over the next months, she takes him into her home, nursing him back to health, and giving him more and more details about their former lives together. She tells him stories of other lovers, too. And reads Dante to him. And cooks him elaborate feasts. And takes him for midnight swims at the beach. All the while, madly sculpting more and more of her “grotesques” – until eventually their situations are reversed and our hero has to begin looking after his caretaker.

This is a first novel and, of course, it shows. It’s not fine literature, but it’s a darn good read. I took it to the beach this summer, and it kept me up late every night. The characters are engaging, and there’s quite a lot of humor for a book about such an appalling situation. It’s a really good love story – no, it’s several really good love stories. And it even has a bit of a literary mystery thrown in at the end. It'll make a terrific movie - I wonder if Johnny Depp has read it.
Posted by jlshall at 4:59 PM