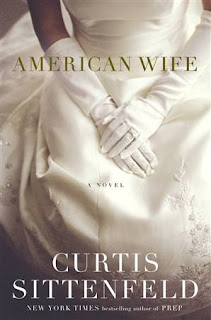 Written by Curtis Sittenfeld
Published by Random House, 2008, 550+ pages
This review refers to an Advance Reader’s Edition of the book

It’s taken me a long time to get this book read. By now, I suppose everybody knows the story. So here’s the shortest synopsis I can come up with: Mild-mannered school librarian (who is not Laura Welch Bush) marries scion of a prominent political family, who turns out to be a future President of the United States (and who is not George Walker Bush), in spite of major social, philosophical and political differences, while at the same time wrestling with the emotional toll of past trauma and indiscretions. A little like a train wreck – it’s disturbing, but you can’t look away. Much too long and rambling, but overall I think it’s an interesting book.

I suppose I should start off by ‘fessing up – I came to this book with a real chip on my shoulder. Well, two chips, actually. First of all there’s the whole George/Laura Bush thing. And then there’s the generation gap thing. OK, three chips – there was also the name thing.

I’ll start with the name thing because that was the most ridiculous and the most quickly remedied. Curtis Sittenfeld. What kind of a name is that for a nice young female author? I was amazed to find that CS was a woman – I’d never heard of her earlier works (I mostly dozed through the early years of this century), so I was all set to read a book written by a male author. Not that I’ve got anything against female authors. Hey, two of my favorite writers are Barbara Pym and Muriel Spark and you can’t get much more female than those two. So, after I got over the initial surprise and feeling slightly deceived, I was able to move on.

For me, the George Bush connection was an enormous problem right at first (not that this is a book about George and Laura Bush, you understand – of course not). I’m probably Dubya’s biggest non-fan. Even before he became our fearless leader and the Decider and all that, the very mention of his name could set me off in an eruption of mindless rants and ravings (my husband said it made me foam at the mouth, but I don’t think that’s literally true). George Bush, after all, represents everything I was glad to leave behind when I migrated away from my home state. And the man isn’t even a real Texan – he was born in Connecticut, for heaven’s sake! See – there I go.

The generation problem was more serious (if not any less idiotic) than the first two hang-ups. Once I found out a little about Sittenfeld and realized she was in her early thirties, I again felt a bit deceived and discomfited. How could someone barely past adolescence presume to write about someone of my generation? To understand and portray what it’s like to have come of age during the turbulence of the sixties and seventies? To say anything meaningful about the doubts and problems of age now facing us Baby Boomers? Or the compromises and adjustments necessary to maintain a marriage over several decades? Authors many years older than Sittenfeld have failed miserably at the task. Who was she to expect to succeed? The hubris of the chick!

Well, after reading American Wife, I have to say I think she did a pretty good job. I felt the book was about a third longer than it really needed to be, but it held my interest all the way through (OK, I skimmed a few sections, but not many). She took a big risk, writing about such a recent period of history, not having lived through it herself. And she mostly got it right. Mostly. A few of the details are a little off – for instance, if I’d showed up at my high school in 1963 (or anywhere, for that matter), wearing a felt skirt or saddle oxfords, I’d have been stripped of my membership in the Youthquake Generation. But these slip-ups are few and far between and wouldn’t really rate a mention, if the book didn’t depend so heavily on a build-up of such period detail.

What she doesn’t do quite so well is persuade me that the Alice/Laura character could be (and remain) so attracted to and sympathetic with the Charlie/George character. From the beginning, they seem to have nothing in common. She’s well-mannered, self-effacing, bookish, and genteel. He’s arrogant, nearly illiterate, boorish, and crude. She’s working class and socially liberal; he’s old-money conservative. I know opposites are supposed to attract (especially in literature), but their relationship really does require a massive suspension of disbelief. I mean, the man has the brain power of a sand dollar, and yet she gives up her career for him! And abandons her best friend to marry him! And stays married to him for thirty years – and bears him a child! Oops, there I go – foaming at the mouth again.
Posted by jlshall at 2:37 PM