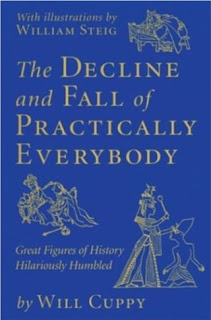 Tomorrow is the 59th anniversary of the death of the great American satirist Will Cuppy. Not as familiar or as widely read today as he should be, Cuppy was a very popular essayist and reviewer during his lifetime. And although a very private, even reclusive individual, he was well-known and respected in the literary world of his day. He published articles in the New Yorker, wrote the “Mystery and Adventure” review column for the New York Herald-Tribune, and also wrote for the Saturday Evening Post. In the 1940s he was the editor of three collections of stories in the crime and mystery genre.

But his finest works were his books of satirical essays and stories about nature and historical figures, starting with How to Be a Hermit in 1929. That book grew out of Cuppy’s experience keeping house for himself (he never married) in a shack on New York’s Jones Island. It became an immediate best-seller when it appeared and went through six printings in four months. It was followed by How to Tell Your Friends from the Apes in 1931, How to Become Extinct in 1941, and How to Attract the Wombat in 1949.

However, the book he’s most remembered for today (and my favorite) is The Decline and Fall of Practically Everybody, which was pulled together by his friend and editor Fred Feldkamp, and published posthumously in 1950. It’s a wonderfully researched, and at times absolutely hilarious, book about the great figures of history from Khufu and Hatshepsut in ancient Egypt, to Captain John Smith and Miles Standish in Colonial America.

Cuppy was very serious about his subject matter, even though he was writing in a comic and satirical vein. According to Feldkamp:

. . . before writing a line on any topic – or even thinking about what he might write – he would read every volume and article on the subject that he could find – including, in many cases, obscure books no longer available in this country. This was standard operating procedure, whether the topic in question was the Giant Ground Sloth or Catherine the Great.

After having absorbed this exhaustive amount of material, he would make notes on little 3-by-5 index cards, which he would then file under the appropriate subheading in a card-file box. Usually he would amass hundreds and hundreds of these cards in several boxes, before beginning to block out his piece.

This research and scholarship shows itself, at least in the case of The Decline and Fall of Practically Everybody, in the hundreds of humorous footnotes that accompany the text. And although Cuppy’s work is sometimes laugh-out-loud funny, you’re always aware that it really does contain quite a lot of legitimate historical fact, which somehow makes it even funnier. Cuppy employs a pseudo-scholarly tone, and the humor is gentle but relentless, and builds throughout each piece – which makes it difficult to give examples. But I’ll try a couple.

The book’s second tale, “Hatshepsut,” ends with this paragraph and its accompanying footnote:

Thutmose III died in 1447 B.C. in the fifty-fourth year of his reign, or the thirty-second counting from the death of Hatshepsut. None of his obelisks, inscribed with whopping big lies about his seventeen campaigns, remained in Egypt. They were picked up as souvenirs and carried to distant lands. One of them, known as Cleopatra’s Needle, although it has nothing to do with Cleopatra and never had, is now in Central Park, New York City, where it causes passers-by to pause for a moment in the day’s rush and inquire: “What the hell is that?” It is called Cleopatra’s Needle because the world is full of people who think up those things. If you ask me, it always will be.
[Footnote: In the reign of Amenhotep IV, or Ikhnaton, the Hittites grew so strong that the Egyptian Empire fell apart. I forget, at the moment, what became of the Hittites.]

Or, another example, toward the end of the chapter on William the Conqueror and his wife Matilda:

The Bayeux Tapestry is accepted as an authority on many details of life and the fine points of history in the eleventh century. For instance, the horses in those days had green legs, blue bodies, yellow manes, and red heads, while the people were all double-jointed and quite different from what we generally think of as human beings. . . .
[Footnote: I don’t know who the people were who made the thing, but I know plenty of people just like them.]

Maybe just a bit more (I love this stuff). Here are a couple of excerpts from the chapter on Hannibal, about the Carthaginians:

Meanwhile the Carthaginians grew richer and richer by peddling linens, woolen goods, dyestuffs, glassware, porcelains, metalwork, household supplies, porch furniture, and novelties all along the Mediterranean. They used a system of barter to start with, but they soon found out that there’s nothing like money. They had learned most of their tricks from their parents, the Phoenicians, who were the most skillful traders of antiquity.
[Footnote: They sailed by the stars at night, depending chiefly upon the North Star. Ask a friend to point out the North Star some night and see what happens.]

Phoenician sailors were the first to establish intercourse with foreigners, an idea which soon proved its worth all over the world. Nobody had thought of it before.
[Footnote: The Phoenicians employed an alphabet of twenty-one consonants. They left no literature. You can’t be literary without a few vowels.]

Will Cuppy died on September 19, 1949, at St. Vincent’s Hospital in Greenwich Village. He’d been suffering from declining health and depression, and had taken an overdose of sleeping pills ten days earlier. Decline and Fall was published a year later in 1950, and a second posthumous volume, How to Get from January to December followed in 1951. Sadly, most of his works have gone out of print over the decades. But a check of online sources shows that Barnes & Noble have an edition of Decline and Fall listed, and Amazon.com indicates David R. Godine is apparently bringing out a new edition of the book, scheduled to appear this month. And that’s good news indeed – everyone should know Will Cuppy.
Posted by jlshall at 9:45 PM