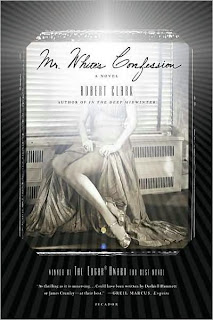 That is the sad thing about memory, I suppose. It goes without saying that search as we will, we cannot know the future; but it seems we cannot even know the past, however much we search it; and so we are always longing for it and seeing it beyond our reach, anticipating what is past as though it were to come. In that way, having a memory is terribly sad, like visiting a graveyard, where even at the loveliest of times one must finally confess that underneath the verdure there are only the dead and gone, that which is lost to us, the things we once loved, that we still love. . . . I suppose that is all memory really is, for the most part: the hunger for what we have loved. [p. 301]

Robert Clark’s Mr. White’s Confession is an atmospheric, genre-bending murder mystery, set in St. Paul, Minnesota, in 1939. Someone is killing dime-a-dance girls in the city, and Police Lieutenant Wesley Horner is assigned to the case. His investigation soon leads him to a chief suspect – one Herbert White, a local eccentric with memory problems and a taste for “glamour” photography. White was a frequent customer at the dance hall where the two murdered women worked, and had taken their photographs just before they turned up dead. And when the police question him, his answers are unconventional and unsatisfying. Is it possible he’s using his claims of faulty memory to mask his guilt?

The book shifts back and forth between Horner’s investigation of the case and White’s diaries from the period. Herbert keeps detailed diaries and scrapbooks to help him remember things. Because of an injury at birth, he has a very quirky memory – he can recall his childhood and events from long ago, and things that happened within the last day or two, but has trouble with the time between – his “middle-distance” memories. And by the time Horner settles on him as the likely killer, we’ve already gotten to know and care about White through those diaries and scrapbooks – a circumstance which really adds to the suspense and tension of the story. But then there’s always the nagging question: Can we rely on him as a narrator?

I thoroughly enjoyed this book. The characters – even the minor characters – are all interesting and believable. No one is perfect – even Lieutenant Horner is troubled and flawed. As a mystery novel, it’s probably only half successful, but that’s really not its point. Much more important is its exploration of themes of guilt and innocence, truth and fiction, past and present, love, faith, and memory. Especially memory. As Herbert White writes in his diary:

. . . it seems to me that perhaps at bottom all our knowing, all our seeing, is limited to what we have remembered: What is to come is, after all, beyond our ken; and what is happening at this moment, precisely now, we apprehend only after the moment is past, after it has become a memory. So memory is more than a souvenir of what was and is no more: It is in this sense everything we know and everything we have. [pp. 333-334]

I received this book through LibraryThing’s Early Reviewer program, although it originally came out in 1998. Before I read it, I wasn’t familiar with Robert Clark’s works. But now I’m a fan. And I’m eager to read his earlier work, In the Deep Midwinter – if only for that wonderful title.
Posted by jlshall at 11:00 AM