Review: So Long at the Fair 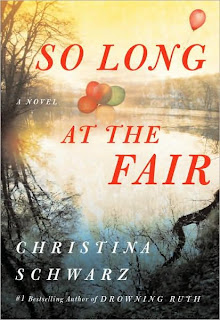 Written by Christina Schwarz
Published by Doubleday, 2008, 244 pages
This review refers to an Advanced Reader’s Edition of the book

The main narrative of Christina Schwarz’s novel So Long at the Fair takes place in the course of one summer day, and is basically the story of a marriage going through a rocky patch. Jon and Ginny are a childless couple, in their thirties, not really unhappily matched, but no longer head-over-heels about each other. Enter Freddi, Jon’s business associate – unattached and attractive – and things start to unravel for Jon.

It’s not a bad story, if a bit trite. The characters are well-drawn and interesting, although none of them are completely admirable or sympathetic. But Schwarz’s examination of adultery, love and betrayal is realistic and doesn’t pull punches. If she had limited the book to that story, I’d have given her full marks. But instead, she’s chosen to add on a couple of other stories which really just end up littering the landscape – a maddeningly shadowy and prolonged tale set in 1963, centering around Jon’s and Ginny’s parents’ generation. And another, contemporary to the saga of Jon/Ginny/Freddi, involving a creepy admirer of Freddi’s whose attentions become more and more sinister as the story goes on.

All these threads do finally come together in the end, but not soon enough or compellingly enough to stir much interest in the outcome. Occasionally the constantly shifting point of view and timeline had me completely disoriented. Sort of like that Seinfeld routine about moviegoers who can't follow the plots. I kept saying, “Now which one is he?” Or “Whose mother is she?” Or “Which one was he married to?” Or “But when did that happen?” I did a lot of flipping back and forth between chapters. I even made lists of characters and did a little family tree chart to try to keep everybody straight.

In the end, I found the book dissatisfying, but not a total loss by any means. I think there’s the germ of a really good novel here. And I admire Schwarz’s writing style – she has an appealing ability to paint wonderfully realistic portraits of character or place in just a few well-chosen lines. Her small-town setting seems vibrant and real, her dialogue authentic. And while I might not recommend this work whole-heartedly, I wouldn’t hesitate to try her future work. I just hope the next book doesn’t leave me feeling quite as puzzled and confused as this one did.
Posted by jlshall at 3:56 PM