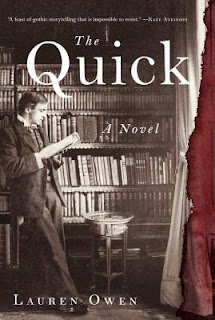 
London, 1892: James Norbury, a shy would-be poet newly down from Oxford, finds lodging with a charming young aristocrat. Through this new friendship, he is introduced to the drawing-rooms of high society, and finds love in an unexpected quarter. Then, suddenly, he vanishes without a trace. Unnerved, his sister, Charlotte, sets out from their crumbling country estate determined to find him. In the sinister, labyrinthine city that greets her, she uncovers a secret world at the margins populated by unforgettable characters: a female rope walker turned vigilante, a street urchin with a deadly secret, and the chilling “Doctor Knife.” But the answer to her brother’s disappearance ultimately lies within the doors of one of the country’s preeminent and mysterious institutions: The Aegolius Club, whose members include the most ambitious, and most dangerous, men in England.

I was really expecting to love this book, but ended up being thoroughly disappointed.

There was a lot of controversy when the book came out last year, concerning the famous (or infamous) "twist" in the plot -- the book starts out normally enough, but then the "twist" kicks in and takes the story in a completely different, unexpected direction.

And I just have to say it: If I'd known what that twist was, I never would have started the book. I can't really say much more than that without giving too much away and possibly spoiling it for other readers.

I did enjoy the book's first brief section dealing with the childhood days of James and Charlotte. Owen sets a lovely atmospheric and foreboding scene. But once the older James goes away to University and London, and (for some, really unbelievable reason) gets involved with a men's club made up of .... -- well, let's just say things deteriorate rapidly. And you've still got 400 pages to read!

Disclaimer:  This review refers to an advance reader's copy of the book, provided free of charge by the publisher, through the NetGalley website. No other compensation was received, and no one attempted to influence my opinion of the book.