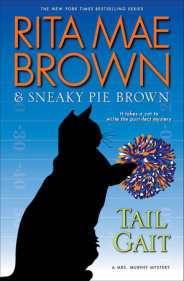 
Spring has sprung in Crozet, Virginia—a time for old friends to gather and bid farewell to the doldrums of winter. Harry and her husband, Fair, are enjoying a cozy dinner with some of the town's leading citizens, including beloved University of Virginia history professor Greg “Ginger” McConnell and several members of UVA's celebrated 1959 football team. But beneath the cloak of conviviality lurks a sinister specter from the distant past that threatens to put all their lives in jeopardy.

When Professor McConnell is found murdered on the golf course the next day—gunned down in broad daylight by an unseen killer—no one can fathom a motive, let alone find a suspect. Just as Harry and her furry cohorts begin nosing into the case, however, a homeless UVA alum confesses to the crime. Trouble is, no one believes that the besotted former All-American could have done the foul deed—especially after Mrs. Murphy, Pewter, and Tucker make another gruesome discovery.

As the questions surrounding Ginger's death pile up, Harry's search for answers takes her down the fascinating byways of Virginia's Revolutionary past. The professor was something of a sleuth himself, it seems, and the centuries-old mystery he was unraveling may well have put a target on his back. As Harry edges closer to identifying an elusive killer, her animal companions sense danger—and rally to find a way to keep Harry from disappearing into history.

I'm giving this one three stars, but that might actually be something of a stretch. I've always loved the Mrs. Murphy mysteries and still enjoy the interaction of all the critters in the books. But I'm afraid the series is really just running out of steam.

In this entry, the mystery seems to be mostly an afterthought, almost completely lost amidst all the interplay among characters. Which wouldn't be so annoying if that interplay had been a little more interesting. Number 23 in the series (or number 24, depending on how you count), and very slow going. Not a terrible read, just not as enjoyable as the earlier Mrs. Murphy books. I'd absolutely still recommend the series, but would say don't start with this one.

Disclaimer: This review refers to an advance reader's copy of the book, provided free of charge by the publisher, through the NetGalley website. No other compensation was received, and no one attempted to influence my opinion of the book.