Against the Fall of Night 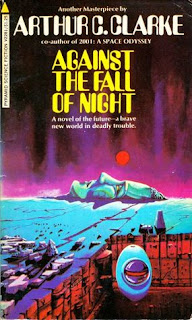 
Living in the 10-billion-year-old city of Diaspar, Alvin is the last child born of humanity. He is intensely curious about the outside world. According to the oldest histories kept by the city fathers, however, there is no outside world--it was destroyed by the Invaders millions of years ago.

One day, Alvin finds a rock with an inscription seemingly meant for him: "There is a better way. Give my greetings to the Keeper of the Records. Alaine of Lyndar." This cryptic message takes Alvin on a quest to discover humanity's true past--and its future.

Clarke's first novel, originally appearing as a novella in a 1948 issue of Startling Stories magazine. Later reworked again and republished as The City and the Stars. I love Arthur C. Clarke's writing and this is a book I've been meaning to read for years now. Not as polished as his more mature efforts, of course, but still a great story and I did enjoy it. Interesting to see a lot of the themes and ideas that show up in his later works getting their first mentions here.

One thing I love about sci-fi is the great artwork on the covers, especially the paperbacks, and this book is no exception. I actually read this in the Kindle edition which, of course, lacks that aspect. But I've had several other editions over the years. The cover pictured above, from Pyramid Books is from the early 1970s. And this Berkley paperback from the 1980s is one of my favorites: 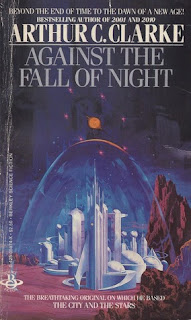