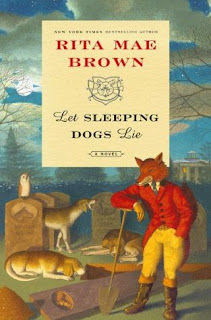 
"Sister" Jane and the Jefferson Hunt Club have traveled from Virginia’s Blue Ridge Mountains to the Bluegrass State of Kentucky to ride with the members of the Woodford Hounds—in the teeth of foul weather. Sister knows better than anyone that an ill wind blows no good.

After the hunt, Sister Jane and her boyfriend, Gray Lorillard, head to a sumptuous party on a nearby estate, also home to a historic equine graveyard. The revelry is interrupted by jarring news: The discovery of grisly remains in the cemetery that are decidedly not equine.

Now Sister and her hounds are on the case, digging up clues to an old murder that links three well-connected Southern families. When mayhem follows the Jefferson Hunt back to Virginia, the deadly doings become all too real: A dear friend of Sister’s is found murdered. Sister and her animal friends must work fast to find a clever killer determined to keep deep-rooted secrets buried.

I've been wanting to sample Rita Mae Brown's "Sister" Jane series for a while now. I'm a real fan of her Mrs. Murphy series, so I guess I was naturally intrigued. And while I didn't enjoy this new book quite as much as the Mrs. Murphy books, I definitely thought it was an entertaining read, if a little slow at times. There was an awful lot of information about riding and fox-hunting. That's to be expected, of course, but not terribly exciting for someone who doesn't ride or hunt, and it really diverted attention away from the mystery elements. But the main characters were interesting, and I wouldn't mind meeting them again in the future. Looks like I've added one more long-running series to my TBR list.

Disclaimer: I received my copy of this book free of charge from the publisher, through Library Thing's Early Reviewer program. No other compensation was received, and no one tried to influence my opinion of the book.