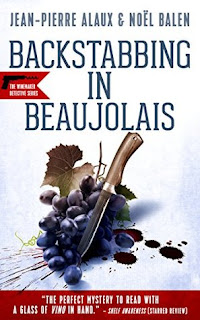 This is the first of the Winemaker Detective books I've read, so I won't pass judgment on the whole series. And this one got glowing reviews at GoodReads and Amazon, so I was all set to be dazzled. But now that I've finished the book, I'm sort of wondering what all the uproar was about. It was entertaining and a very fast read -- I think it took me about two hours, and I'm a slow reader. Not really much of a mystery, though.

The book starts out promisingly enough with a dead body discovered in a vat of Beaujolais. But then there's a flashback to three months earlier, and we don't get back to that murder until near the end of the book. And by that point I thought it was pretty obvious "who dunnit" and I was beginning not to care.

There was naturally a lot of talk about wine and wine-making and wine country, which I expected and enjoyed. I was just hoping for a little more suspense. But I did like the central characters, wine expert Benjamin Cooker and his assistant Virgile, and wouldn't mind getting to know them a little better -- so I'm still planning to try one of the earlier books in the series, just to be fair.

Disclaimer:  I received my copy of this book free of charge from the publisher. No other compensation was received, and no one attempted to influence my opinion of the book.