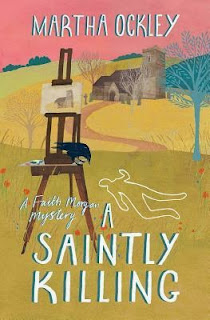 
It is late July and preparations are underway for the one thousandth anniversary of the church at Little Worthy. As Vicar, Faith Morgan has planned a whole range of celebrations—a music festival, a photographic booklet of recent history, a planting of new trees in the graveyard and vicarage garden, bell ringing, and a visit from the bishop.

A new painting of the church has been commissioned from distinguished local artist Sal Hankley. Sal, who has recently returned from Australia, is not a universally popular choice. She is outspoken and opinionated, and she has made her share of enemies.

Before the painting can be completed, Sal is found dead at her easel on a hillock overlooking the church. A respectable member of the community—a member of the Parochial Church Council—is under suspicion. Faith, now trying to hold the church and the village together, once again finds herself teamed with her former boyfriend, Detective Inspector Ben Shorter, as they seek to discover the murderer.

I was a little doubtful about A Saintly Killing when I started reading it. Even though I knew from the start that its main character was a vicar, I have to admit being a bit put off by the church setting at first. Well, maybe slightly more than a bit -- just too much religion, and not enough whodunnit I thought.

But after the first couple of chapters, things picked up a bit and I ended up enjoying it quite a lot. In fact, I wouldn't mind spending more time with Faith Morgan and her parishioners. And I can definitely see myself recommending this one to friends who like cozies.

Disclaimer:  I received my copy of this book free of charge from the publisher, through the Early Reviewer program at Library Thing. No other compensation was received, and no one attempted to influence my opinion of the book.