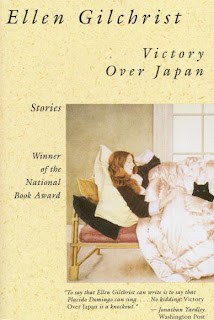 In her second collection, winner of the National Book Award, Ellen Gilchrist creates an unforgettable group of Southern women, enchanted and enchanting, who cavort through life, in and out of bars, marriages, and divorces, through the world of art and culture, drug busts, lovers' arms, and even earthquakes, in an attempt to find, if not happiness, at least some satisfaction. . . . Ms. Gilchrist has her own unique literary voice – and it is outrageously funny, moving, tragic, and always appealing.

I read Ellen Gilchrist's first collection of stories, In the Land of Dreamy Dreams (1981) about a quarter century ago. I was living in northern Louisiana, and her tales of young Southern women trying to escape the bonds of their upper-class lives while still enjoying the privileges of those lives, struck a deep chord in my psyche. Do psyches have chords? Oh well, you know what I mean – I liked the darn book. A lot. In fact, I liked it enough to reread it at least once, and recommend it to anyone looking for interesting contemporary Southern fiction.

But for some reason, I'd never followed up with any of Gilchrist's later work. She's not a terribly prolific writer, but she's published quite a few other collections of stories, as well as several novels. And when I decided to read Victory Over Japan for the Battle of the Prizes Challenge, I was looking forward to getting reacquainted with an old favorite.

Well, maybe it's just that my circumstances have altered a lot over the years or that as I've gotten older my tastes have inevitably changed. But I have to admit I was a little disappointed in this collection. Not a lot disappointed – but a bit. It's not that the stories aren't well written – they definitely are that; Gilchrist is one of the finest short fiction writers around. But where the characters in "Dreamy Dreams" were complicated and endearing, I found most of the figures in this second collection unappealing, self-involved, and occasionally just boring. Strange, since some of the characters are present in both books – well, as I said, maybe the problem is just a change in my literary tastes.

Few of the people in this collection seem to have any purpose or aim in life other than having a good time, and they are frequently mean, selfish, and destructive – bad news for anyone who comes into contact with them. Well, I suppose we're all mean, selfish, and destructive sometimes – that's pretty realistic, but also pretty overwhelming when you confront it over and over again in each tale.

I believe my favorite story in the book was the first one, the eponymous "Victory Over Japan." In it, third-grader Rhoda Manning (one of Gilchrist's recurring characters) befriends a classmate, Billy Monday, who was bitten by a squirrel and forced to undergo a series of rabies shots. Sounds pretty horrendous, I know, but the story is actually filled with Gilchrist's brand of sardonic whimsy and humor. Rhoda decides to "interview" Billy for the school newspaper, and sets out to get to know him better. While working together on the school's paper drive (remember those?), they have a brief encounter with a man who may or may not be a closet pedophile – a corner of his basement is filled with magazines featuring pictures of "naked children on every page." And when Rhoda finally tries to tell her mother about the incident, she's side-tracked by the radio news report of the dropping of the atomic bomb on Japan ("Strange, confused, hush-hush news that said we had a bomb bigger than any bomb ever made and we had already dropped it on Japan and half of Japan was sinking into the sea."). That night, Rhoda dreams she's flying an airplane carrying the bomb to Japan:

Off we go into the wild blue yonder, climbing high into the sky. I dropped one on the brick house where the bad man lived, then took off for Japan. Down we dive, spouting a flame from under. Off with one hell of a roar. We live in flame. Buckle down in flame. For nothing can stop the Army Air Corps. [p. 16]

Would I recommend the book? Well, not as whole-heartedly as I'd recommend In the Land of Dreamy Dreams. I'd definitely recommend starting with that earlier work; but if you're interested in the literature of the contemporary American South, Gilchrist should certainly be on your reading list. She has an amazing ear for those wonderful southern speech patterns and crazy stories. And no one can beat her when it comes to evoking the modern South, especially New Orleans (albeit the pre-Katrina city, of course) and Louisiana. Here she is, in her story "Crazy, Crazy, Now Showing Everywhere," summing up the state in one short paragraph:

They were on the causeway now, the long concrete bridge that connects New Orleans with the little fishing villages across the lake. Mandeville, old live oaks along the seawall, old houses mildewing in the moist thick air. Evangeline, the moss-covered trees seem to call. Tragedies, mosquitoes, malaria, yellow fever, priests and nuns and crazy people. [p. 87]

So, even though I found this collection uneven and not as dazzling as her debut work, I still believe Ellen Gilchrist is a writer everyone should know.
Posted by jlshall at 12:56 PM