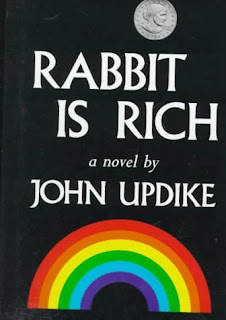 The hero of John Updike's Rabbit, Run (1960), ten years after the hectic events described in Rabbit Redux (1971), has come to enjoy considerable prosperity as Chief Sales Representative of Springer Motors, a Toyota agency in Brewer, Pennsylvania. The time is 1979: Skylab is falling, gas lines are lengthening, the President collapses while running in a marathon, and double-digit inflation coincides with a deflation of national confidence. Nevertheless, Harry Angstrom feels in good shape, ready to enjoy life at last – until his son, Nelson, returns from the West, and the image of an old love pays a visit to his lot. New characters and old populate these scenes from Rabbit's middle age, as he continues to pursue, in his erratic fashion, the rainbow of happiness.

John Updike, who died this year at age 77, published more than twenty novels and more than a dozen short story collections. In addition, he wrote poetry, essays, art and literary criticism, and even children's books. He wrote regularly for The New Yorker and The New York Review of Books. But of all his writings, the series of novels centering around Harry "Rabbit" Angstrom and his family, are probably the most well-known. Two of the books, Rabbit Is Rich and Rabbit At Rest, won the Pulitzer Prize. And Rabbit Is Rich also won the National Book Award and the National Book Critics Circle Award.

Over the years, I've read a bit of Updike's short fiction and some of his essays. But before I read Rabbit Is Rich, I'd only read one of his other novels – The Poorhouse Fair, his first published novel from 1959. I read it many years ago, in college, and have only the vaguest memory of it now. So I really didn't know exactly what to expect from the RIR book; but my husband has read all the Rabbit books and was always very enthusiastic about them, so when the Battle of the Prizes Challenge came along, I decided to give Rabbit a try.

And it was a very good decision. Rabbit Is Rich is a beautifully written portrait of a fascinating, maddening, imperfect but attractive man and the people who come in and out of his life during one very eventful year. It's filled with lots of wonderful, annoying and lovable characters. Harry ruminates endlessly on life and its complexity and mystery. He thinks about religion and wonders about the existence or non-existence of God. He also thinks a lot about sex. Actually, he thinks mostly about sex, in one way or another. In fact, there's quite a lot of sex in the book (some of it pretty raunchy), including an episode where Harry and his wife Janice indulge in a little "wife-swapping" while on a tropical vacation trip with friends from their club back home. Well, it's the '70s, you know. Oh, and the language isn't always the most genteel. So if that's something that bothers you, this might not be your cup of literary tea.

The book is written entirely from Harry's point of view, although he doesn't exactly narrate the story. Updike uses a sort of stream of consciousness style that's a bit startling at first – Harry's mental gymnastics can be a little challenging to follow. For example, here we have the scene of Harry going for a run in the evening after dinner:

Tonight he pushes himself as far as Kegerise Street, a kind of alley that turns downhill again, past black-sided small factories bearing mysterious new names like Lynnex and Data Development and an old stone farmhouse that all the years he was growing up had boarded windows and a yard full of tumbledown weeds milkweed and thistle and a fence of broken slats but now was all fixed up with a little neat sign outside saying Albrecht Stamm Homestead and inside all sorts of authentic hand-made furniture and quaint kitchen equipment to show what a farmhouse was like around 1825 and in cases in the hall photographs of the early buildings of Mt. Judge before the turn of the century but not anything of the fields when the area of the town was in large part Stamm's farm, they didn't have cameras that far back or if they did didn't point them at empty fields. [p. 228]

That's all one sentence – weaving in and out of Harry's mind, from the physical fact of the street and its buildings, into Harry's memories of the place, and back out again. As I said, Updike's style here can take some getting used to. But after a while, as you become accustomed to Harry's rhythms, the text flows almost as smoothly and freely as if Harry's thoughts were your own. And, depending on how you feel about Rabbit Angstrom and his libido, that can be rather exhilarating or quite disturbing – or even both at the same time.

One of my favorite quotes from Rabbit Is Rich comes toward the book's end:

Maybe the dead are gods, there's certainly something kind about them, the way they give you room. What you lose as you age is witnesses, the ones that watched from early on and cared, like your own little grandstand. [p. 462]

And while death comes into the book quite a lot – or thoughts about death and dying – it still manages to be a strangely uplifting tale. Updike reportedly said he found it difficult to end the book, because he was "having so much fun" with Rabbit and his family and friends. And I felt a little that way, too, reading the book's last pages. Even though his son has disappointed him over and over, his mother-in-law might have to move in with him and his wife, and he thinks he may have ruined himself financially by buying the new house he's been wanting for so long, Harry is a contented man in the book's final scene. He sits in his study, watching the Steelers on TV, and holding his newborn granddaughter for the first time:

Through all this she has pushed to be here, in his lap, his hands, a real presence hardly weighing anything but alive. Fortune's hostage, heart's desire, a granddaughter. His. Another nail in his coffin. His.

And fortunately for me, there are three more books in the series, so I don't have to leave Harry's world forever. Now I just need to go back and read the first two books so I can find out how Rabbit and company arrived at this place and time. Definitely something to look forward to.
Posted by jlshall at 11:36 PM