Review: The Old Man and Me 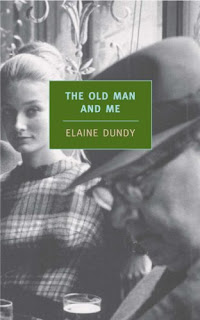 Written by Elaine Dundy
New York Review Books, 2009; 231 pages
This review refers to an advance uncorrected proof of the novel.

In The Dud Avocado, Elaine Dundy laid bare the life of the young expatriate in 1950s Paris in all its hilarious and heartbreaking drama. With The Old Man and Me, Dundy tackles the American Girl in 1960s London, a bit older, but certainly no wiser. Honey Flood (if that's her real name) is determined to make the Soho scene, and she'll know she's arrived when she snags its greatest prize, the literary star C.D. McKee.

Set in an early sixties London just beginning to swing, The Old Man and Me is populated by hipsters, pill-poppers, literary upstarts, would-be bohemians, and titled divorcees matching wits in smoky nightclubs and Mayfair flats. By the time Honey gets what she thinks she's after, she may find that the world she was hell bent on conquering has gotten the better of her.

I read this novel some months ago, and almost decided not to review it. But as it was an advance readers copy, from Library Thing's Early Reviewer program, I did a short review for the LT site. And I'm just now getting it posted here. Yes, I know – disgracefully tardy. Well, it's been that kind of year, folks.

I was really hoping to love this book; the publisher's synopsis about "an early sixties London just beginning to swing" made it sound so attractive. But in the end, I thought the tale of Honey Flood and her quest to meet and win the affections of famous man-about-town C.D. McKee just fell flat. Dundy was a talented writer, but it seems to me she was trying a bit too hard to be cute and outrageous here. I think much of the problem might be that Dundy just made the mistake of not following that old rule: write about what you know. Honey/Betsy Lou is supposed to be roughly my own generation, but Dundy herself was almost exactly the same age as my mother. Now there's really no reason why authors shouldn't be able to write convincingly about those younger or older than themselves, but in this case, I think Dundy just didn't get the era or mind set of the early 1960s quite right.

The basic story is interesting and has a mystery from out of the past at its heart. But it unfolds so slowly and circuitously that by the time I found out just why Honey is dead set on marrying (and/or murdering) C.D. McKee, I was so bored with the whole endeavor, I had to force myself to keep turning the pages. I wasn't charmed by Honey/Betsy Lou, or any of the other characters – except maybe C.D. himself. As a matter of fact, I really didn't find a single admirable or sympathetic character in the novel, with the possible exception of Pauly, Honey's young stepmother who's already dead when the story begins. In general, although the book is well-written and a relatively fast easy read, I thought it hit just short of the mark.
Posted by jlshall at 5:54 PM