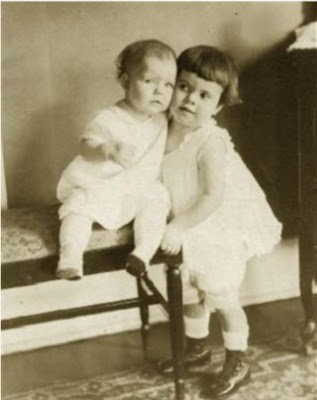 Last Friday would have been my mother's 87th birthday. This is a photo of her and (I believe) her younger sister, my Aunt Bette, taken around 1924. Since Bette looks to be about a year old, Mamma would have been around three. Check out those snazzy shoes.

Mamma had two sisters (my Aunt Linnie came along nearly five years later), and until my mom started putting on weight later in life, they all looked very much alike. In fact, in photos of the sisters in their teens and early twenties, if there's no note on the back, I sometimes have trouble figuring out which sister is my mom!