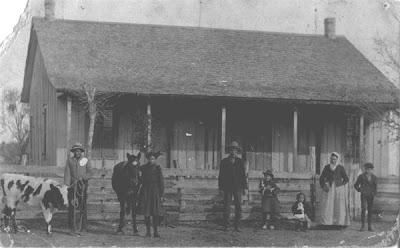 Not my family this time. This is actually a photo of the family of M's (maternal) grandmother - she's the tiny girl, third from the right, holding a large baby doll. She was born April 24, 1905, and would have been about 5 years old here.

Her mother, Louisa, is to her left. Her father, Henry Fest, stands in the center of the shot. The other young people are three of her four older brothers and her older sister.

The photo was taken around 1910, on their farm in San Antonio, Texas, on what became San Pedro Avenue.

M's grandmother is no longer with us, but if she were, I don't think she'd be too surprised that I'm a little late with my birthday tribute.
Posted by jlshall at 6:11 AM