As usual, I've got several books going at the moment, so it took me a little while to make up my mind about which one to use for a teaser. Decided on Keith Donohue's Angels of Destruction – one of the ARCs I never managed to read last year (but thanks to the ARC Reading Challenge, I'm finally getting around to all those unread advance copies that were glaring at me from their shelves, making me feel so guilty).

I'm a few pages away from this snippet, so I'm not really sure exactly what's going on. But I know the two people involved are Norah, a mysterious young orphan, and her classmate Sean. And Norah has just been trying to persuade Sean to share her cigarette. From p.35:

"I know lots of things," she said, and catching the interest in his eyes, she shrieked and tore off through the woods, her shoes skating across the snow and bare earth, and he did not catch up to her until they reached the back fence of Mrs. Quinn's yard. At a blind corner, they nearly crashed, and as he caught himself short by grabbing her shoulders, Norah screamed at the touch and laughed and screamed again, and he could see stars glistening at the back of her throat.

Okey-dokey. Apparently the book combines elements of fantasy and reality in telling its tale, but even so, I'm wondering about those stars. . . . 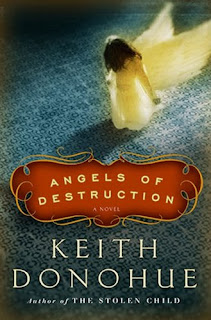 How about you? Got a great teaser from a book you're reading right now? Want to play along? Teaser Tuesdays is hosted by mizB at Should Be Reading. If you'd like to read more teasers, or take part yourself, just head on over to her blog.
Posted by jlshall at 8:38 AM