Review: A River in the Sky 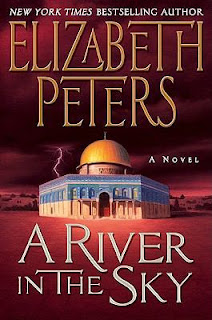 This review refers to an uncorrected proof of the book, provided free of charge by the publisher, through Good Reads' First Reads Program.

Elizabeth Peters’ latest entry (no. 19!) in her long-running series of novels centered around Victorian female archaeologist Amelia Peabody opens in August 1910. The intrepid Peabody and her husband Emerson are at home in England, having put their Egyptian adventures behind them for the moment. But any dreams they may have of spending some tranquil summer days in their rose garden in Kent soon evaporate when the two are recruited (by the War Office and Buckingham Palace) for some hush-hush derring-do abroad. Not Egypt this time, but Palestine. Another (would-be) archaeologist, Major George Morley, claims to be heading for Jerusalem to search for the legendary Ark of the Covenant. But the Germans are becoming more active in that ancient region, and the British government is convinced Morley is a German agent working for the Kaiser to stir things up in the area. Though he doubts Morley could be a spy, Emerson agrees to help, if only to prevent the destruction that an unprofessional excavation might cause. So Emerson, Amelia, and entourage are off to the Holy Land.

At the same time, in a parallel story, Amelia’s son Ramses is having his own adventures on a dig in Samaria, north of Jerusalem – also involving those nasty German spies. And before he can meet up with his parents at their desert encampment and deliver the important information he’s discovered, he runs into some serious trouble involving a lovely female archaeologist who might or might not be working for the enemy.

The two story lines come together in an exciting conclusion, with lots of unexpected twists, thrilling near-disasters, and generous helpings of humor. I was very eager to read this one, as I'd heard great things about the series. Since I'd never read any of the earlier books, I really didn't have any expectations, although I had thought there would be more of a whodunit-type mystery involved. But the book is actually an adventure story, along the lines of H. Rider Haggard’s or Robert Louis Stevenson’s tales – not my favorite genre, but I enjoyed it just the same.

I've noticed that some readers have complained that Peters spends too much time introducing her characters and explaining the various relationships. And I admit that did slow things down a bit, but as a newcomer to the books I actually appreciated all that exposition. I’m still not completely sure how Ramses and Nefret and several other characters fit into the group, but then I have eighteen earlier installments to catch up with. And that confusion didn’t detract from my enjoyment of this latest book.

My one real criticism is that the novel jumped back and forth between the two main story lines so quickly and so often – after the first couple of chapters I found that really annoying, and wished we could just stay with one plot line for a while. I was tempted to take out a pair of scissors and do a little rearranging of my own. All things considered, though, I thought it was a good, fast, entertaining read. Definitely recommended.
Posted by jlshall at 1:38 PM