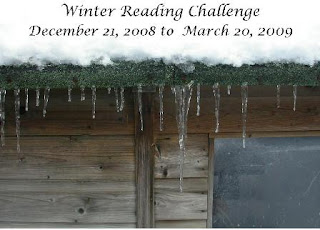 It seems I've officially completed the Winter Reading Challenge, even though I still have most of the reviews to write. At the start, I said I was aiming for at least five books, since that's what I managed to read in last year's Challenge. As it turns out, I actually read twelve books during the three months the Challenge has been in progress. Here's what I read (I'll add more links to reviews as I get them posted in the next few days):

That's a really eclectic mix, and I can honestly say that I enjoyed all the books, although I struggled a bit with the Byatt and the Unsworth. Still had a good time reading them, though. Many of the titles were works I'd had on my TBR list for years, although a few were new finds. A couple were from series that I'd read in the past, and I discovered one new series (the Miss Zukas Mysteries) that I intend to dip into again in the future. I suppose if I had to pick a favorite, it would be Wharton's The Age of Innocence, but The Master and The Great Victorian Collection would be tied for a close second-place.

So I did quite a bit better than last year. Now if I can just stay on track, I should just about reach my next big goal which is fifty books by year's end. Thanks so much to Robin of My Two Blessings for hosting, and to everyone else who took part and posted all those great reviews.