Review: The Age of Innocence 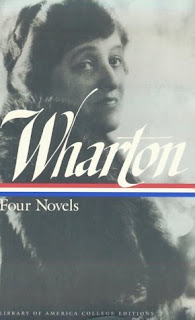 If I'm going to see a film made from a book, I generally prefer to read the book first. But that being said, I should also say thank goodness for Martin Scorsese. If I hadn't finally seen Scorsese's magnificent 1993 film of The Age of Innocence, I might never have made up my mind to read the book. And that would have been a definite shame because, as I discovered with pleasure, Edith Wharton's novel is one of the finest books of the 20th Century.

The book, which won the Pulitzer Prize for fiction in 1921, is set in late 19th Century New York society, and tells the story of Newland Archer, a young lawyer and man-about-town. Archer marries a young society woman, May Welland, but is attracted to her cousin, Countess Ellen Olenska, who has left her wealthy and abusive Polish husband and fled back to her American family. Ellen Olenska is hoping to divorce the Count, and Archer's firm is handling the Countess's legal affairs. The young attorney is assigned to her "case" and their professional dealings soon lead to a more romantic relationship – mild by today's standards of course, but fairly sizzling by the standards of that time and place.

The Age of Innocence is a satirical look at a recently-bygone age, but also a nostalgic one. And the style of writing so perfectly fits the era of the book's setting, I had to keep reminding myself that Wharton was writing in 1920. The book explores the theme of women's changing roles, as well as the importance of family and personal honor and integrity, and the problems facing a society in the midst of changing times. All themes that are still significant for our own era.

I highly recommend this book to all readers, and I really regret it took me so long to get around to reading it myself. I tried reading Wharton's House of Mirth many years ago and just couldn't really get into it. Well, there's no accounting for adolescence – my high school self found Pride and Prejudice mind-numbingly boring, too. But after falling in love with The Age of Innocence, I'm thinking I should really give Wharton's other works another try.