Friday Finds is a weekly event hosted by MizB at Should Be Reading. Participants are asked to share with other bloggers about the new-to-you books found during the week – books you either want to add to your TBR (to be read) list, or that you just heard about that sounded interesting.

I found most of my Friday Finds for this week while I was scouting books I might want to add to my "possibles" list in the Once Upon a Time III Challenge, so the fantasy genre is heavily represented. I don't believe any of them are very recent books – in fact, Aegypt first appeared sometime in the 1980s – but they're "new finds" for me. The Brookner I picked up a couple of weeks ago in our local library's sale, but since I didn't do a Friday Finds post last week, I'm including it here. 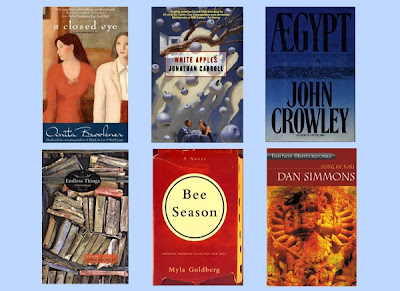 "Aegypt is a sequence of four novels by John Crowley detailing the work and life of Pierce Moffett, who prepares a manuscript for publication even as it prepares him for some as-yet unknown destiny, all set amidst strange and subtle Hermetic manipulations among the Faraway Hills of New York. . . . The four volumes mingle Moffett's real and dream life in America in 1979 and the early 1980s with the narrative of the manuscript he is preparing for publication. The manuscript is a historical fiction that follows the briefly intersecting adventures of Italian heretic Giordano Bruno and of British occultists John Dee and Edward Kelley."

Harold Bloom has praised the books, and my favorite reviewer, Michael Dirda chose the whole series as his favorite book back in 2007. Well, I've never been terribly impressed with Harold Bloom's pronouncements, but if Dirda likes the books, I definitely want to find out more about them.
Posted by jlshall at 9:44 PM