This week's letter is "Y." So I went to my shelves, and this is what I pulled out. 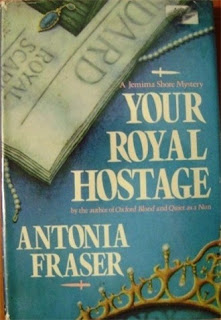 In her sixth appearance as observant sleuth, Jemima Shore notices details and files them away in her mind for use later on.... Just fired as investigative reporter for Megalith Television in London, Jemima covers the impending royal wedding for Television United States. Princess Amy of Cumberland, aged 22 and poor, will marry French Prince Ferdinand, aged 33 and rich; but a group of Animal Rights people plot to kidnap the princess in order to gain recognition for their cause. The plan goes awry, and Jemima saves the day. Stylishly presented...with a dash of satire.

And the cover of one of the paperback editions: 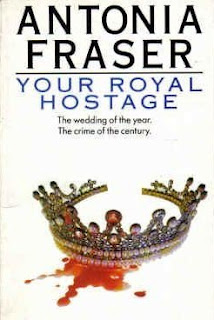 Antonia Fraser has written many fine nonfiction works, including massive biographies of Marie Antoinette, Mary Queen of Scots, King Charles II, and Oliver Cromwell. But, beginning in the 1970s, she also produced a great series of mystery novels featuring TV personality and amateur sleuth Jemima Shore. Jemima is not only beautiful, bright, and successful, she also manages to get herself involved in some wonderfully mysterious (and frequently dangerous) situations. I once read that Fraser (who was married and the mother of six children at the time) tried to make Jemima as different as possible from her own persona. Thus, Jemima Shore is unmarried and childless and has a very exciting and visible career - far removed from Fraser's own life as the aristocratic wife of Scottish MP Sir Hugh Fraser.

There have been, I believe, nine Jemima Shore novels (and one book of stories). Your Royal Hostage is number six, and probably not the most interesting of the lot; but they're all worth reading. My favorite is probably the first one, Quiet as a Nun, which first appeared in 1977, and has Jemima investigating the spooky goings-on in an ancient convent.

The books have also been adapted, twice, as TV series. The shows were done for British TV, but at least one of the series (with Patricia Hodge as Jemima) aired in the US on PBS. Don't know if they're available on DVD or video, but they're definitely worth watching if you get the chance.
Posted by jlshall at 4:00 AM