So here goes another daily tease: time for another little stumble down memory lane. (Didn't post one yesterday because it was Teaser Tuesday, and I figure one tease a day is really quite enough.)

Monday, I talked about a book I read last summer – The Angel's Game by Carlos Ruiz Zafon. So today I'm moving a little further back. In 2008 I read Mark Haddon's wonderful debut novel The Curious Incident of the Dog in the Night-Time. 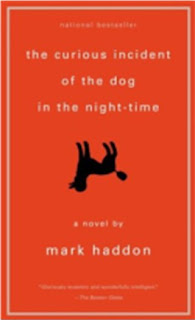 Christopher John Francis Boone knows all the countries of the world and their capital cities and every prime number up to 7,057. He relates well to animals but has no understanding of human emotions, and cannot stand to be touched. Gifted with a superbly logical brain, Christopher is autistic. Everyday interactions and admonishments have little meaning for him. "I do not always do what I'm told," he admits. "And this is because when people tell you what to do it is usually confusing and does not make sense. For example, people often say 'Be quiet' but they don't tell you how long to be quiet for..."

At fifteen, Christopher's carefully constructed world falls apart when he finds his neighbor's dog, Wellington, impaled on a garden fork and is initially blamed for the killing. Christopher decides that he will track down the real killer and turns to his favorite fictional character, the impeccably logical Sherlock Holmes, for inspiration. But the investigation leads him down some unexpected paths and ultimately brings him face to face with the dissolution of his parents' marriage. As Christopher tries to deal with this crisis within his own family, the narrative draws readers into the mysterious workings of Christopher's mind.

At once deeply funny and heartbreakingly poignant, The Curious Incident of the Dog in the Night-Time is one of the freshest debuts in years.

2. It was 7 minutes after midnight. The dog was lying on the grass in the middle of the lawn in front of Mrs. Shears's house. Its eyes were closed. It looked as if it was running on its side, the way dogs run when they think they are chasing a cat in a dream. But the dog was not running or asleep. The dog was dead.

And a couple more snippets. This is Christopher, thinking about the death of his mother:

But Mother was cremated. This means that she was put into a coffin and burned and ground up and turned into ash and smoke. I do not know what happens to the ash and I couldn't ask at the crematorium because I didn't go to the funeral. But the smoke goes out of the chimney and into the air and sometimes I look up into the sky and I think that there are molecules of Mother up there, or in clouds over Africa or the Antarctic, or coming down as rain in the rain forests in Brazil, or in snow somewhere. (pp. 33-34)

And here he is, musing about the mysteries of life:

You can read my full review of the novel here. But long story, short: I loved it. I'd give it a definite A, maybe even an A+. The book is sad and funny at the same time; beautifully written and sometimes excruciatingly honest. Christopher, even with all his problems, was such an engaging character, I felt almost bereft when the book ended, and I had to take my leave of him.
Posted by jlshall at 5:40 AM