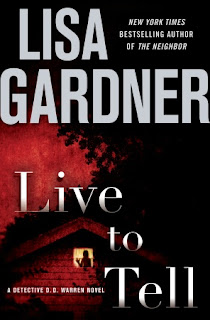 This review refers to an advance uncorrected proof of the novel.

At the beginning of Lisa Gardner’s Live to Tell, a horrendous crime has been committed. Four members of a Boston family have been brutally murdered, apparently killed by the family’s father who is barely clinging to life in a hospital intensive care unit. Police detective D.D. Warren is assigned to head up the investigation of the case, which at first looks like a murder-suicide; but as the investigation progresses, it appears there may be much more complicated and sinister circumstances to consider.

There’s nurse Danielle Burton, a survivor of a similar family drama nearly a quarter century ago, who now dedicates herself to helping troubled children in a tightly secured pediatric psych ward. When the police show up at her hospital, and as the anniversary of her tragedy approaches, she realizes the violence she remembers may be starting all over again. And then there’s Victoria Oliver who fights a daily battle to protect her eight-year-old son Evan from his own violent rages – and to keep Evan from killing her in the process.

At the outset there seems to be no connection between these events and characters, but soon Detective Warren and her crew begin to realize they might have more in common than anyone believed. And the killer might be getting ready to strike again.

Gardner handles all this shifting around between characters and plot elements very adroitly, so that it never becomes confusing or annoying. In fact, one of the things I loved about the book is the way you get to see its main protagonist, police Sergeant Detective Warren, through the eyes of several different characters, in addition to that all-seeing narrator.

This was my first experience with Lisa Gardner’s work (although I’ve seen her on TRU-TV!). I've heard amazing things about her D.D. Warren series, so I was expecting to be dazzled. And I wasn't disappointed. This is a great read, with lots of excitement, suspense and surprises – a real up-all-night-er. Although, to be completely honest, I have to say I found D.D. Warren herself to be not the most appealing of literary heroines. She's very rough around the edges, with many not-so-endearing foibles and character flaws. She also has a way with suspects and possible suspects that would probably land an actual real-life police detective in very hot water. I have a feeling if a cop in the real world handled things the way Warren does in this novel, he/she would end up getting themselves sued, suspended, or killed pretty quickly. But it's a real testament to Gardner's superb story-telling that I was perfectly willing to suspend all my disbelief while reading this terrific thriller.

Note: I received an advance reading copy of this novel, free of charge, from the publisher. No other compensation was received, and no one attempted to influence my opinion of the book.
Posted by jlshall at 12:45 PM