This week's letter is "X." And I have to admit, I couldn't find a single book on my shelves with a title beginning with X. So I'm using a book on one of my wish lists from a few years back.

X Marks the Spot: On Location with The X-Files
Written by Louisa Gradnitzer and Todd Pittson
Published 1999 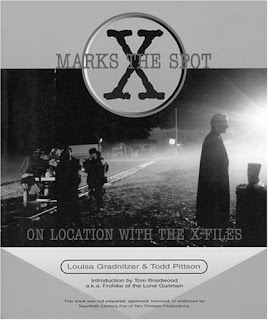 The X-Files was a pop culture phenomenon. When it first hit the airwaves, The X-Files was heralded for being radically different than anything else on television. The rainy, foggy "Wet Coast," which was home to the show, affected the look of the series – dark, haunting, mysterious – and its storylines – paranoid, conspiratorial, fantastic.

Written by the former location managers for The X-Files, X Marks the Spot documents the development of the popular television series into a critical and commercial success by peering behind-the-scenes to see just what made it so different.

Gradnitzer and Pittson reveal the role that sets and locations played in creating and maintaining the X-Files "look," and provide a glimpse into the problems and conventions that the production faced during its growth.

Also in the book are plot synopses from the series' first 5 years, explicit descriptions of locations where scenes were shot, and anecdotes from crew members about life on set and with the stars – stories about producing groundbreaking television.

A collector's item for fans of the show and an informing read for anyone interested in the production of a major television program, X Marks the Spot also includes numerous images from the television show itself, as well as never-before-seen backstage photos by former crew members. It's an essential insider's guide.

OK, this is just slightly embarrassing to reveal, but I was a huge X-Files fan back when it was on TV; and I still think it was a fun show. This book is lots of fun, too. And it does make you realize how much the show's distinctive look was a result of the weather in Vancouver and that Pacific Northwest region where the first few seasons were shot. So I suppose all us fans should be grateful to that "Wet Coast" area.

But while I love the style of those early episodes, I definitely couldn't live with all that rain, fog and mist – not to mention all those nasty, green-blooded extraterrestrials crawling all over the place!
Posted by jlshall at 5:45 AM