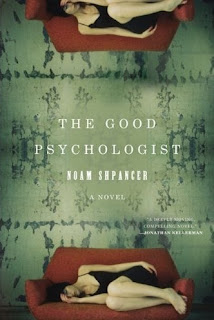 This review refers to an uncorrected proof of the novel.

In Noam Shpancer's debut novel, The Good Psychologist, the eponymous therapist finds himself taking on an interesting new patient. Tiffany is a stripper (or "exotic dancer") who has developed an extreme case of stage fright. Her livelihood is threatened, along with her plans to recover custody of her young daughter. The psychologist wants to help the dancer, but as they proceed with her treatment, the woman's problems begin to have a dangerous resonance in the doctor's own private life. As he becomes more and more involved in Tiffany's story, his professional objectivity becomes difficult to maintain, and eventually even his personal life is affected, including his relationship with Nina, the former colleague who is also the mother of the daughter he's never met.

I ended up liking The Good Psychologist much more than I expected to in the beginning. At first, the abundant discussion of the field of psychotherapy began to get tedious and I kept getting the feeling I was reading someone's class notes for Psych 101. And the psychologist's world is tightly circumscribed. Mostly we see him in his office, during therapy sessions; or with his students in the university class he teaches in the evening. Occasionally we see him at home, or engaging in a leisure-time basketball game with a group of friends – although those friends are never allowed a real presence in the book. A couple of times, he has very brief meetings with Nina. But everything in the novel is seen from his point of view; basically, we're in his head the whole time. So things began to feel a little claustrophobic after a while.

I was also a little bothered by the fact that the protagonist is referred to, throughout the book, as simply The Psychologist (or "Professor" by his students). I'm not sure why Shpancer should want to distance us from his main character in this fashion – maybe something about the professional distance therapists must maintain when treating patients? Or just a stab at being clever and mysterious? Whatever he had in mind, I don't think it really works in the context of the novel.

But The Good Psychologist has some unexpected surprises along the way. And somewhere around the middle of the book, I found myself really beginning to like the psychologist and became thoroughly caught up in his story. The book has humor, suspense, and a unique narrative voice that I found very appealing. It's a beautifully written work, and a remarkable achievement for a first-time novelist. I hope it finds a wide audience.

Note: I received an advance copy of this book from the publisher, through Library Thing's Early Reviewer program. No other compensation was received, and no one tried to influence my opinion of the book.
Posted by jlshall at 6:00 AM