The Daily Tease: The Hills at Home

For today's Daily Tease I have in mind Nancy Clark's wonderful novel, The Hills at Home. 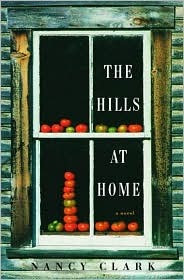 While always well-stocked with clean sheets, Lily Hill is not expecting visitors. At least not in the numbers that descend upon her genteelly dilapidated New England ancestral home in the summer of '89. Brother Harvey arrives first, thrice-widowed and eager for company; then perennially self-dramatizing niece Ginger and her teenaged daughter Betsy; then, [Ginger's brother] Alden, just laid-off from Wall Street, with his wife Becky, and their rowdy brood of four....

As summer fades into fall, it becomes clear that no one intends to leave. But just as Lily's industrious hospitality gives way to a somewhat strained domestic routine, the Hill clan must face new challenges together. Brimming with wit and a compendium of Yankee curiosities, The Hills at Home is an irresistible modern take on an old-fashioned comedy of manners.

The cover of the paperback edition: 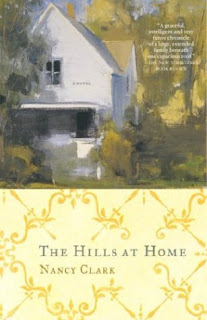 Outside, the night blew perfectly foul and all of the Hills had stayed home. Rain flung itself by the fistful against the clapboards, rain spangled the windowpanes, and the rain bore down so hard against the roof that shots bounced up from the slates and rained down again in shattery shards and splinters. The wind wheeled round and the startled rain skidded sideways. The rain sought, the rain battered, the rain invaded. This was an extravagant rain, as if somewhere, somehow, someone, miserly and profligate in turn, had been amassing rain until he possessed enough to hurl down fiercely and decisively upon the helplessly spinning earth.

My thoughts and a few quotes:

I started reading Nancy Clark's The Hills at Home in the summer of 2005. I believe I saw one of those thumbnail reviews in the New York Times Book Review when the paperback edition came out – it sounded intriguing, so I picked up a copy and read a bit before getting sidetracked by one thing or another. Didn't get back to the book until a whole year later. But when I picked it up again the next summer, and read a few pages, I could not put it down – read it straight through in just a few days (rare for me), and then went back to the beginning and read huge chunks of it over again (unheard of). It became one of my all-time favorite reads. The writing is elegant and witty, and the book is full of wonderful personalities and funny, unpredictable events. And Lily Hill became one of those fictional characters I'd most like to be able to meet in real life. I think we could probably become great pals (in a weird-old-broad sort of way).

Here's a sampling of snippets:

The Ben Franklin store started stocking flats of seedlings out front on a board bench a month too early but Lily always fell for a few six-packs, not able to resist the petunia colors and the pansies' expressions. Then, overnight, her field was adrift with nodding daffodils. The lilacs would flower next, and then it would be the irises' turn. Lily had begun to work in her garden, kneeling on a square of newspaper and digging with a trowel in her perennial bed, turning up the seeds of weeds that needed only five seconds of sunlight to germinate, she had read. It was foolish of her, Lily knew, but now and then she allowed a trowelful of earth to sit in the sun as she slowly counted to five. (--Chapter 6: "The Hills Take Wing," pp.411-412)

When Miss Angler arrived and approached Harvey and Lily who stuck to the terrace stones as if to a beachhead, she handed Lily a business card at which Lily glanced. Oh dear, Tina was a Teena, which Lily would rather not have known, although Miss Angler's parents were the ones to blame. The last year she taught school, Lily had had a Hidey in class. Lily had known then, the time had come for her to retreat into private life. (--Chapter 6: "The Hills Take Wing," p.433)

. . . . Lily moved from guest to guest shedding feathers from her hat and hugging a ten-pound bag of Northeast Songbird Mixture to her chest and bidding everyone to scoop up handsful of flax and millet and sunflower seeds to throw after [the newlyweds]. What a grand idea, they were all saying, far better to throw seed than to toss rice or confetti or stones, for one of the Happening side claimed to have been to a wedding where colored aquarium pebbles had been cast at the newlyweds. ("What were they, adulterers?" Alden asked Louis and then wished he hadn't). (--Chapter 6: "The Hills Take Wing," p.472)