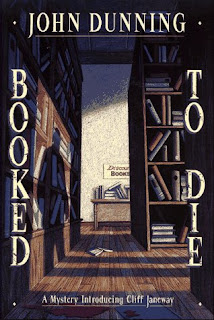 OK, after yesterday's look at one of the books I read in 2008, today I'll continue the backward stroll, with a glance at 2007. In July of that year I was introduced to John Dunning's Cliff Janeway series of bibliomysteries.

I think I first discovered the books while browsing on eBay, looking for something new and different (and cheap) to read. I hadn't really done much blogging back then, and didn't know about all the great recommendations I could get from book bloggers. Anyway, I managed to find a paperback copy of the first book in the series, Booked To Die, so I was able to get in right at the beginning (which is unusual for me – I generally jump in somewhere near the middle).

Denver homicide detective Cliff Janeway may not always play by the book, but he is an avid collector of rare and first editions. After a local bookscout is killed on his turf, Janeway would like nothing better than to rearrange the suspect's spine. But the suspect, local lowlife Jackie Newton, is a master at eluding the law, and Janeway's wrathful brand of off-duty justice costs him his badge.

Turning to his lifelong passion, Janeway opens a small bookshop – all the while searching for evidence to put Newton away. But when prized volumes in a highly sought-after collection begin to appear, so do dead bodies. Now, Janeway's life is about to start a precarious new chapter as he attempts to find out who's dealing death along with vintage Chandlers and Twains.

And the cover of the paperback edition: 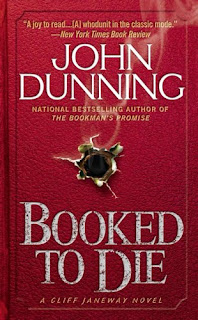 Bobby the bookscout was killed at midnight on June 13, 1986. This was the first strange fact, leading to the question, What was he doing out that late at night? To Bobby, midnight was the witching hour and Friday the thirteenth was a day to be spent in bed.

My Thoughts and a few more quotes:

I love whodunits, and I'm a sucker for a book about books. So when I discovered Dunning's Janeway novels, I knew I'd found something of interest. Cliff Janeway is a Denver homicide detective turned rare book dealer who still gets involved in solving crimes. He's not your ordinary book nerd – he's a little rough around the edges, and doesn't suffer fools lightly. But he truly loves the world of books and book collecting.

The novels are a bit more "hard-boiled" and Chandler-esque than I usually like. For instance, in the cozies I generally read, I'm very unlikely to run into passages like this one where Janeway is describing the soothing effect of his apartment with its wall-to-wall books:

"I've been collecting books for a long time. Once I killed two men in the same day, and this room had an almost immediate healing effect." (--Chapter 1, p.12 of the paperback edition)

Or this, from Janeway's description of his fight with suspect Jackie Newton:

I ducked under his next punch and pounded his guts on the inside. He exploded in a hurricane of bad breath. (--Chapter 15, p.156)

One of the nicest things about the novels is the added literary chat and book lore you're treated to, along with the mysteries themselves. Take, for instance, a passage early in this first novel:

It was a quiet day on Book Row. At Seals & Neff a few customers had come and gone and the day was quickly settling into its inevitable, uneventful course. There was a young woman in the store, who had brought in a bag of books. Bookscouts, like dealers, come in all sizes, colors, and sexes. This one was a cut above the others I had seen, at least in the category of looks, but it was clear from what was being said that she had more than a smattering of ignorance when it came to books.

"Believe this, honey," Neff said. "I don't need the grief. If you think I'm trying to steal your book..."

"It's a Book-of-the-Month Club first," Neff said, enunciating each word with chilly distinction. "It's printed from the same plates as the first, or maybe the same sheets are even used; that's why it says first edition. But the binding is different, there's no price on the jacket, and the book has a blind stamp on the back board."

"A little dent, pressed right into the cloth. Look, I'll show you. You see that little stamp? That means it's a book club book. Whenever you see that, it came from a book club, even if it's written 'I'm a first edition' in Christ's own blood inside. Okay?"

She sighed. "I'll never learn this stuff. How much is it worth?"

Dunning followed Booked To Die with four more Cliff Janeway mysteries: The Bookman's Wake (my favorite), The Bookman's Promise, The Sign of the Book, and The Bookwoman's Last Fling. (There's also Booked Twice – one volume containing both Booked To Die and The Bookman's Wake.) This initial book in the series was first published in 1992, years before Amazon and the Internet started affecting book publishing and collecting. So, to be fair, the books are a bit dated now (something Dunning himself readily admits). But they're still fascinating reads.
Posted by jlshall at 6:00 AM