Lately I've been sifting through our book collections, trying to get them all catalogued at LibraryThing. One of the most enjoyable parts of the process has been getting reacquainted with all the children's books I've accumulated over the years. Most are books I've acquired as an adult, but a few are actual relics of my childhood (relics of a relic!) – and even, in some cases, my parents' childhoods. And one thing my home library tour has made me realize is just how much my youthful reading was dominated by fantasy and folk or fairy tales. Well, even as a grown-up I'm partial to fiction with a touch of magic in it, so I guess that shouldn't really come as a surprise. Especially for a girl who owned her very own elf outfit (see below)! 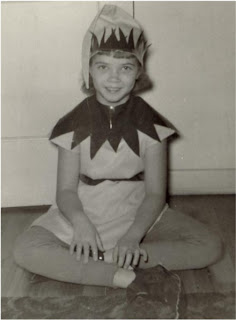 I suppose my earliest experiences with fantasy stories were the old German folk tales my old German Granny used to tell me. I don't really remember many specific details, but I do remember that an awful lot of them were blood-curdling tales of bad little children who had horrendously gruesome things happen to them when they disobeyed their elders. Undoubtedly, they were meant to inspire obedience and good manners, but I imagine they mostly resulted in nightmares and life-long neuroses.

Like most children of the 1950s, I grew up with Walt Disney, and I think a lot of my early introduction to fairy tales probably came in Disney cartoons and Disney comic books and Little Golden Books. I remember being taken to see "Snow White and the Seven Dwarfs" long before I went to school, and being frightened out of my wits by the image of the evil stepmother. And my own mother always told me that I cried so much over a turtle in one cartoon ("Cinderella" maybe?) that I had to be removed from the theater. I'm not sure what the turtle was doing or having done to it, but I know I still find turtles rather disturbing, all these years later.

All right, I should get to the point here. I've been thinking about fairy tales a lot lately because recently I came across one of my favorite childhood books which happens to be a book of fairy tales. It's called Granny's Wonderful Chair and it was written by Frances Browne and illustrated by Florence White Williams. The only copyright date in my edition is 1928, and that's for the illustrations. But I believe the original book actually appeared sometime during the 19th Century.

My copy of the book is pretty fragile – the pages are browning and brittle, and starting to separate from the spine. It was passed on to me sometime in the early 1950s by my older cousin Shirley Ann, who got it from (I believe) our even older cousin Alga Mae, who got it from her older sister Gladys Ann (this was Texas, you understand – so double-barreled names were the norm in our family). It's a fawn-colored book with an illustration of acorns on the cover, and as a child I absolutely adored it.

The main story in the book (the framework) is the tale of Snowflower, a little girl who lives with her grandmother, Dame Frostyface, "in an old time, long ago, when the fairies were in the world. . . .":

. . . they lived together in a little cottage built of peat, and thatched with reeds, on the edge of a great forest . . . and the only good piece of furniture in the cottage was a great arm-chair with wheels on its feet, a black velvet cushion, and many curious carvings of flowers and fawns on its dark oaken back. 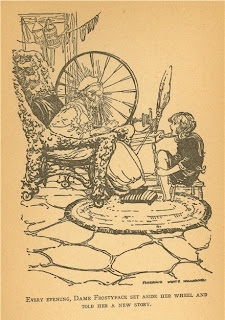 Every evening, Snowflower's grandmother sits in her chair and tells the little girl a story. Snowflower wonders where her grandmother could get so many stories, but she soon finds out. One day Dame Frostyface has to go on a journey to visit an old aunt, and says she can't take Snowflower along, but

". . . the hens will lay eggs for you; there is barley-meal in the barrel; and, as you have been a good girl, I'll tell you what to do when you feel lonely. Lay your head gently down on the cushion of the arm-chair, and say 'Chair of my grandmother, tell me a story.' It was made by a cunning fairy. . . .and if there be any occasion to travel, you have only to seat yourself in it, and say, 'Chair of my grandmother, take me such a way.' It will carry you wherever you wish. . . . "

After that introductory chapter, the rest of the book is taken up with the story of Snowflower's adventures at the court of King Winwealth who is throwing a week-long celebration in honor of the birthday of his daughter Princess Greedalind. (Yes, you can tell a lot about the characters in the book from their names.) Once the king learns about the chair's wonderful story-telling properties, he asks for a story every night, and each tale is given a chapter in the book: "The Christmas Cuckoo," "Lady Greensleeves," "The Greedy Shepherd," "The Story of Fairyfoot," "The Story of Childe Charity," "Sour and Civil," and "The Story of Merrymind." Then in the final chapter, "Prince Wisewit's Return," Snowflower's grandmother and the king's long-lost brother both reappear and everybody lives happily ever after, just as they should.

Of all the stories in the book, my childhood favorite was "The Story of Fairyfoot." It's the tale of a young prince with feet as dainty and delicate as a fairy's (right, he's the one called Fairyfoot), which wouldn't seem like such a problem, except that all the people of Stumpinghame (Fairyfoot's home kingdom)

. . . had feet so large and heavy that it was by no means convenient to carry them far. Whether it was the nature of the place or the people, I cannot tell, but great feet had been the fashion there time immemorial, and the higher the family, the larger were they. 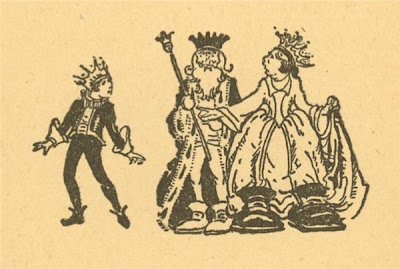 Fairyfoot's family is so ashamed of him and his tiny feet, that he's sent to live with a family of shepherds. One day he goes traveling and meets up with a fairy who takes him along to a gathering of the fairies, where there's talk of a beautiful princess from another kingdom who also has a foot problem. It seems she washed her feet in the magic "Growing Well," causing them to grow so large she can barely move. In the end, of course, it turns out there's another magic well (the "Fair Fountain") that makes feet grow small. So Prince Fairyfoot and Princess Maybloom are able to marry and spend their days traveling from kingdom to kingdom and magic well to magic well. 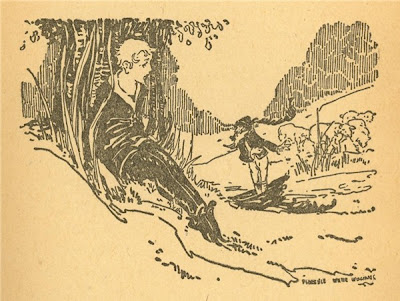 I re-read the book last night, and I have to confess I'm not exactly sure what it was that so intrigued me as a child, why I found the book so appealing. Possibly the illustrations, which really are a charming remnant of magical 1920s illustration art, a cross between Nouveau and Deco. 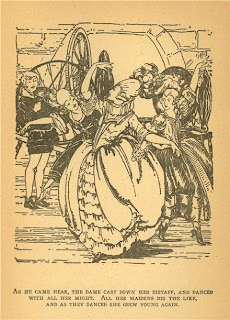 But the stories themselves are fairly standard stuff – and highly moralistic, as most fairy tales tend to be. And decidedly formulaic. Besides the "Chair of my grandmother, tell me a story" mantra, each tale ends with the king saying that except for last night's story, he's never heard such a wonderful tale, and then bestowing some piece of clothing or jewelry on little Snowflower until in the end she's dressed just as sumptuously as Princess Greedalind.

Come to think of it, maybe the formula was the appeal. 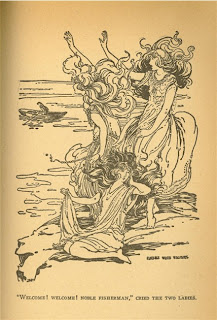