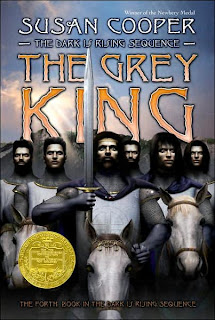 "You see," Will said, "it's the first quest, without help, for me – and the last, because this now is the raising of the last defence the Light can build, to be ready. There is a great battle ahead . . . not yet, but not far off. For the Dark is rising, to make its great attempt to take the world for itself until the end of time. When that happens, we must fight and we must win. But we can only win if we have the right weapons. That is what we have been doing, and are still, in such quests as this – gathering the weapons forged for us long, long ago. Six enchanted Signs of the Light, a golden grail, a wonderful harp, a crystal sword . . . They are all achieved now but the harp and the sword, and I do not know what will be the manner of the sword's finding. But the quest for the harp is mine. . . ."

The Grey King, Susan Cooper's fantasy novel for young people, is the fourth and next to last book in her five-novel Dark Is Rising sequence (also the title of the sequence's second book). It continues the story of Will Stanton and his struggle against the forces of evil – the Dark.

We first met Will (in The Dark Is Rising), as an eleven year old country boy – the youngest member of a large, happy family. In the course of that novel, Will learns he isn't just any ordinary eleven year old – he's also the last of the "Old Ones," immortal beings dedicated to keeping the world safe from the ravages of the Dark. In The Grey King, Will is continuing his quest for the "six enchanted Signs of the Light." His search for the "wonderful harp" is set in Wales, and Welsh folklore plays an important role in the book.

At the novel's opening, Will is recovering from hepatitis – he's been very ill, and that illness has caused him to forget much of the ancient knowledge he possessed as an Old One. To recuperate, he's sent to stay with his Auntie Jen and Uncle David Evans on their farm in Wales. There he meets the "raven boy," Bran Davies – a boy about his own age, with the white hair and pale skin of an albino, and strange golden eyes. Surprisingly, Bran seems to know all about Will and is ready to help him in his quest to find a golden harp that will produce music to "wake the Six Sleepers" and prepare for the final battle between good and evil:

When light from the lost land shall return,
Six Sleepers shall ride, six Signs shall burn,
And where the midsummer tree grows tall
By Pendragon's sword the Dark shall fall.

The two boys become friends, and as they set out on their adventure, Will gradually begins to recover his memory and the prophecy he once memorized:

On the day of the dead, when the year too dies,
Must the youngest open the oldest hills
. . . .
By the pleasant lake the Sleepers lie . . .
Yet singing the golden harp shall guide
To break their sleep and bid them ride.

And as Will learns a bit of the Welsh language from Bran, and starts to compare the local place names and geographic features around his uncle's farm with the memorized lines of prophecy, the final battle comes closer and closer.

The Grey King was first published in 1975 and was the winner of the Newbery Medal for excellence in American children's literature in 1976. And though it's classified as a children's book, in many ways it's the most "adult" of the first four books in the sequence. (I haven't yet read the final novel in the sequence, Silver on the Tree.) There are more adult situations in this one, and more explicit violence. Also, the frequent use of the Welsh language does slow the action down at times – possibly a problem for some younger readers. Unless, of course, they speak Welsh.

The Dark Is Rising sequence is proving to be just as powerful and addictive as I always imagined it would be. My favorite book in the series is always the one I happen to be reading at the moment! But The Grey King is definitely one of the best. Although I missed the presence of Merriman Lyon a bit (he figures in this book, but only briefly), I enjoyed the Welsh setting and the introduction of a fascinating new character in Bran Davies. His story and the mystery of his birth and birthright seem to be at the heart of the entire saga.