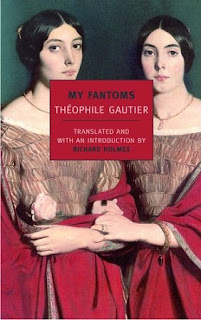 Written by Théophile Gautier
Translated by Richard Holmes
Published by New York Review Books, 2008, 194 pages
This review refers to an uncorrected advance proof of the book

In these seven examples of the short Gothic work by 19th Century French writer Théophile Gautier, tapestries, statues, and corpses come to life, and young men are seduced and ruined by other-worldly visitors – labeled "fantoms" by translator Richard Holmes.

In "The Adolescent," a young man has nightly encounters with a beautiful goddess woven into a tapestry in his uncle's summer-house. In "The Priest," an aging cleric looks back on his youthful infatuation with a lovely but just slightly undead courtesan who used his blood to keep herself young and beautiful. "The Painter" is the tale of an artist who may have been possessed by a demon, or possibly just "driven mad by cause or causes unknown." The narrator of "The Opium Smoker" describes his erotic hallucination involving a dead opera singer. The young performer in "The Actor" learns that no one can portray the Devil like the Devil himself. And in "The Tourist," a visitor to the ruins in Pompeii becomes obsessed with a "lump of molten lava" which has solidified around one of the victims of Vesuvius, and left a perfect impression of her body.

The last piece in the book, "The Poet," is actually a character sketch of Gautier's friend, Gérard de Nerval, who committed suicide in 1855 by hanging himself from a window grating. It was through Nerval that Gautier met Victor Hugo. And it was Hugo who inspired the young Gautier to abandon his aspirations to be a painter, and take up writing instead.

Gautier's work also has a witty and, at times, almost whimsical quality that you would not expect to find in Poe's tales. This doesn't mean the stories aren't creepy – they most definitely are that. Holmes says that "catching the exact pitch and tone of Gautier's stories, with their high decorative finish, and their various deflections of wit and lubricity, was not easy." But he seems to have done a laudable job.

Holmes also provides quite a lot of background information on Gautier and his times, and the history of his own involvement with Gautier's works. I would definitely recommend reading all of this (especially his Postscript) before undertaking the stories themselves.