Review: The Dark Is Rising 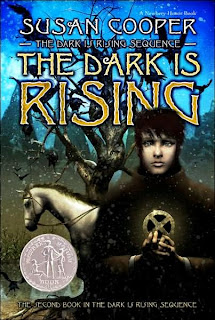 "The Walker is abroad," he said again. "And this night will be bad, and tomorrow will be beyond imagining."

Much like Lucy walking through the wardrobe's magic doorway into Narnia, or Alice plunging down the rabbit hole – Will Stanton, in The Dark Is Rising, enters his magnificent adventure quite suddenly on a seemingly ordinary day.

Will went downstairs to pull on his boots, and the old sheepskin jacket that had belonged, before him, to two or three of his brothers in turn. Then he went out of the back door, closing it quietly behind him, and stood looking out through the quick white vapour of his breath.

The strange white world lay stroked by silence. No birds sang. The garden was no longer there, in this forested land. Nor were the outbuildings nor the old crumbling walls. . . . Will set out down the white tunnel of the path, slowly, stepping high to keep the snow out of his boots. As soon as he moved away from the house, he felt very much alone, and he made himself go on without looking back over his shoulder, because he knew that when he looked, he would find that the house was gone.

But it isn't really an ordinary day – it's Midwinter Day, and Will's eleventh birthday. And it's also the day on which Will learns that he isn't just the youngest child in the large Stanton brood. He's the last of the Old Ones, immortal beings dedicated to keeping the world safe from the forces of evil – the Dark. And, as the book's title tells us, the Dark is rising.

After Will steps out into this strange new world, he's introduced to another Old One, Merriman Lyon, the Merlin-like figure who will be his guide and teacher on the journey of discovery that will introduce Will to his new powers and responsibilities. And they will be allies in the battle against the Black Rider.

Steeped in Celtic mythology and revolving around the legends of King Arthur, The Dark Is Rising, which was a Newbery Honor Book for 1974, is the second work in Susan Cooper's five-book sequence of the same name. It follows 1965's Over Sea, Under Stone [see my review of that book], and is very different from that book although there are a few obvious tie-ins. Merriman Lyon appears in both books, although his identity as an Old One was more shadowy in the first. In general, magic and folklore play a much more open and prominent role in The Dark Is Rising than they did in the first book.

Both books involve a quest for ancient artifacts that are vital in the struggle to keep the forces of darkness from overwhelming the world. In The Dark Is Rising, Will learns that he is the Sign-Seeker whose quest is "to find and to guard the six great Signs of the Light, made over the centuries by the Old Ones." The Circle of Signs that Will seeks is one of the four Things of Power to be used in the final battle against the Dark, and is a set of six circular ornaments, each made of a different material – wood, bronze, iron, water, fire, and stone. When the signs are brought together, the Dark is powerless against them.

Unlike the Drew children in Over Sea, Under Stone, Will and the other Old Ones are aided by their ability to communicate with each other using the "Old Speech," and by their power to move easily back and forth in time. As Merriman tells him:

"You will see, Will. . . we of the Circle are planted only loosely within Time. The doors are a way through it, in any direction we may choose. For all times co-exist, and the future can sometimes affect the past. . . ."

This series has been an exciting discovery for me. I've enjoyed all three of the books I've read so far (I'll be posting a review of the third book soon, I hope). Susan Cooper's ability to draw the reader into a world of myth and magic with a seemingly effortless blending of the real and the fantastic is very appealing. She has a wonderful way of showing us her story unfolding, rather than simply telling us about it. We get to know her characters through their interactions within the narrative, and I think that makes them feel more real. I'm looking forward to reading the rest of the story of Will Stanton and his quest, in the last two books of the sequence.