Once Upon a Time II Challenge: The Wrap-Up 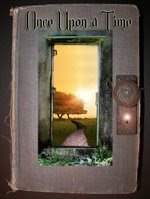 I had some real doubts about finishing the Once Upon a Time II Challenge – I've gone and let things come right down to the wire again. But around here, "down to the wire" is pretty normal.

In the beginning (or maybe I should say Once upon a time…) I just signed up for the Journey. Well, seeing as how I was involved in a dozen or so other challenges at the time, that seemed like the most I should take on. So I read Over Sea, Under Stone for my Journey, and it went so fast, I changed my mind and decided to try Quest the First (at least five books of any mix of all the genres). I mostly stuck to fantasy, with one book of fairy tales – although I suppose the Dark Is Rising sequence could be considered mythology, too.

And although I'm not going to do a separate post about it, I even re-read A Midsummer Night's Dream last night. It's always been one of my favorite Shakespeare plays. I once played Hermia in a lab theater production, many long years ago (roughly, about the Middle Mesozoic era). And I was surprised at how many of the lines I still remember. It's a great, feisty role – I remember that I especially loved the "fight scene" between Hermia and Helena when Hermia says "I am not yet so low / But that my nails can reach unto thine eyes." Yeah! Cat fight! You can always get a laugh with that one.

Here are the books I read, with a few notes and links to reviews:

Over Sea, Under Stone, by Susan Cooper. The first book in Cooper's Dark Is Rising sequence of five novels. This one sets the mood and hints at the basic framework of the story, and introduces some of the major themes and characters. It's centered around the Drew children and their search for an ancient artifact important in the battle of good versus evil. I haven't finished the whole sequence yet, but so far, I think this is my favorite of the books I've read.

The Dark Is Rising, by Susan Cooper. Second book in the sequence. This one introduces us to eleven-year-old Will Stanton and his quest for the six magical Signs of Light. Will is the last of the Old Ones – immortal beings dedicated to keeping the world safe from the evil domination of The Dark.

Greenwitch, by Susan Cooper. In this third book in the sequence, the Drew children are back. Together with their Great Uncle Merriman they return to the seaside village of Trewissick in order to track down the grail they discovered in the first book, after the priceless artifact has been stolen by forces of the Dark. They're aided in their search by a mysterious new boy who turns out to be Will Stanton, the Old One from book two.

Harry Potter and the Sorcerer's Stone, by J.K. Rowling. I held out a really long time, but finally had to give in and read this one. And I was pleasantly surprised – it was a very enjoyable read. Even so, I'm still not sure exactly what all the uproar is about. Maybe I'm just a little too old. Or maybe I'm just a plain old Muggle.

Granny's Wonderful Chair, by Frances Browne. OK, this was really cheating a little because I had read this book when I was a child (or had it read to me). But that was a long time ago, so I'm going to count it as a new read. It's a very old-fashioned book of fairy tales, written in the 19th Century, with some extremely charming early 20th Century illustrations. Lots of traditional fairy tale stuff – giants and magic wells and mermaids and talking animals. And, of course, a chair that tells stories.

Finally, I want to say thanks to Carl at Stainless Steel Droppings for hosting the challenge, and also to all the other participants. I had a wonderful time reading the five books, and all the great reviews turned me on to many other books I want to sample in the future. And speaking of the future, Carl says he'll be hosting Once Upon a Time III next year – and I'm ready to sign up.
Posted by jlshall at 7:58 AM

Labels: books, Once Upon a Time Challenge, reading, reading challenges