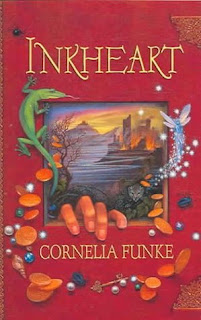 Twelve-year-old Meggie's father Mortimer (or "Mo" for short) is a bookbinder who has instilled in his daughter a great love of books and reading. But he has never read aloud to her. One night a stranger named Dustfinger shows up at their home and from him Meggie learns some amazing facts about her father, her mother who disappeared nine years earlier, and a mysterious, rare (and dangerous) book called Inkheart – a book her father tries desperately to keep anyone from finding. To keep it away from Meggie (and anyone else) he hides the book in the library-like, book-filled home of Meggie's Great Aunt Elinor.

Eventually though, Meggie learns the secret reason Mo has never read to her – whenever he reads aloud, objects and characters become real and come out of the books. It's a skill he discovered when Capricorn, the villain of the Inkheart book, came out of the book and into this world when Meggie was only three. But it's also a skill Mo can't really control, demonstrated by the fact that at that same moment Meggie's mother disappeared, presumably into the story.

The evil Capricorn uses Dustfinger (who was also a character from the Inkheart book) to lure Mo and Meggie to his hideout village. He intends to use Mo's skill to bring treasure out of books like Treasure Island and The Arabian Nights. But when Dustfinger learns of Capricorn's plans, he helps Mo, Meggie and Elinor escape from the prison where they're being held. Then, after Mo finds Fenoglio, the author of Inkheart, they come up with a plan they hope will keep Capricorn from going through with his awful schemes.

The plot gets even more complicated when Meggie is recaptured by Capricorn's men, along with Fenoglio, and it's discovered that she shares her father's fantastic gift for reading people and objects out of books. Finally, Meggie and Fenoglio devise a plan to defeat Capricorn and his evil intentions, but they're in for some surprises – both good and bad – before their adventure comes to an end.

I've had Inkheart on my must-read list for years now, and I've always been put off by the book's length. But for this year's Once Upon a Time Challenge, I decided to go on and give it a try. It's received so many glowing reviews, and the story sounded so appealing that I was expecting to really love it. So I'm extremely disappointed to have to say that I was -- well...disappointed. Instead of the magical tale I was hoping for, this turned out to be a pretty standard adventure story. Aside from the central device of a character in a book being able to bring other characters out of other books by "reading them out," there doesn't seem to be much of anything that's actually magical about Inkheart.

And it's WAY too long. Much of the book is given over to long descriptions of what the characters are thinking and doing while they're waiting around to do something else. After two or three hundred pages of that sort of stuff, I was very tempted to just skip ahead to the final chapter, find out how it ended, and move on. (But I stuck with it right to the end.)

It's possible I'm just too old for the book. I imagine younger readers would have more patience and wouldn't feel so much like they were wasting their time with the nearly-600-pages of not much happening. If I'm going to devote that much time to a book, I need a little more excitement to keep me engaged.

Qualifies for the following reading challenges: Books In Translation Challenge, Mount TBR Challenge, Once Upon a Time X, Women Challenge 2016.