To Have and Have Not 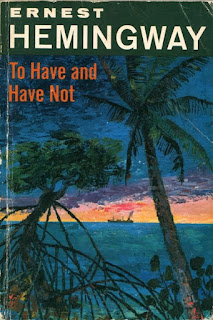 
In Ernest Hemingway's 1937 novel To Have and Have Not, fishing boat captain Harry Morgan is portrayed as a fundamentally good man forced, by economic circumstances, to run contraband between Cuba and Florida. In the book's opening section, Harry's wealthy charter customer tricks him by slipping away after a day's fishing without paying the money he owes. Needing to recoup his losses in order to support his family, Harry makes a very poor (and fateful) decision to help smuggle Chinese immigrants into Florida from Cuba. After that episode turns into one more fiasco, he begins regularly ferrying illegal cargo between the two countries – including alcohol and Cuban revolutionaries.

The novel is set in Depression-era Key West, and allows Hemingway to make use of the glaring contrast between the wealthy visitors to the region (the "Haves") and the poor local residents (the "Have Nots"). It was apparently much influenced by the Marxist ideology Hemingway was exposed to during his involvement in the Spanish Civil War while he was writing it. Interestingly, it was the only book actually banned in the U.S. in 1938, after library patrons lodged complaints about its "immorality."

To Have and Have Not has been on my TBR list for decades now, so I decided to read it for the Back to the Classics Reading Challenge this year.

Now I understand why so many critics have called this Hemingway's weakest novel.

The book is actually a novella and a series of sketches, very tentatively held together by the story of Harry Morgan and his (mostly shady) boat charter activities. The best thing I can say about it is that it can be read in a few hours. Another good thing is that it inspired one of my favorite movies (1944, directed by Howard Hawks, starring Bogart and Bacall), even though the film is really nothing like the book. It also seems to have been one of the inspirations for an awful lot of Miami Vice dialogue.

I'm afraid I can only recommend this one if you're looking to consume everything Hemingway wrote -- and if you don't mind a LOT of non-P.C. name calling and quite a bit of pretty graphic violence.

● Qualifies for the following reading challenges: Back to the Classics Challenge, Mount TBR Challenge.