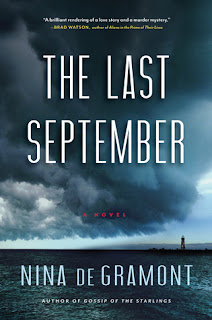 
Brett has been in love with her husband, Charlie, from the day she laid eyes on him in college. When he is found murdered, Brett is devastated. But if she is honest with herself, their marriage had been hanging by a thread for quite some time.

All clues point to Charlie’s mentally ill brother, Eli, but any number of people might have been driven to kill Charlie – a handsome, charismatic man who unwittingly damaged almost every life he touched. Brett is determined to understand how such a tragedy could have happened – and whether she was somehow complicit.

This book was such a surprise! Part mystery, part romance, part coming-of-age saga. When I first read the description in Library Thing's Early Reviewer listing, it sounded just a bit too much like "chick lit" for my taste. But I had second thoughts, and now I'm so glad I did. It's strange, though -- I thoroughly enjoyed the book, even though I really didn't find any of the central characters particularly sympathetic, and that's very unusual for me.

The plotting was intricate, but very well handled. For a while, towards the end, I was afraid the author might be going astray (I don't think it's a spoiler to say the plot seemed to be heading in the direction of stereotype and cliche), but was glad to find I was very wrong about that.

The story is set on Cape Cod, one of my favorite places and one of the reasons I chose the book. And I think the fact that deGramont really doesn't make much use of that setting is probably my major complaint about the book. But that's really a minor issue. This was an excellent read, and one I'll definitely be recommending.

(Full disclosure: I received my copy of The Last September free of charge from the publisher, through Library Thing's Early Reviewer program. No other compensation was received and no one attempted to influence my opinion of the book.)