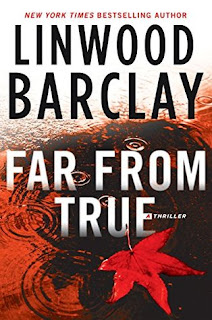 
After the screen of a run-down drive-in movie theater collapses and kills four people, the daughter of one of the victims asks private investigator Cal Weaver to look into a recent break-in at her father’s house. Cal discovers a hidden basement room where it’s clear that salacious activities have taken place—as well as evidence of missing DVDs. But his investigation soon becomes more complicated when he realizes it may not be discs the thief was actually interested in....

Meanwhile, Detective Barry Duckworth is still trying to solve two murders—one of which is three years old—he believes are connected, since each featured a similar distinctive wound.

As the lies begin to unravel, Cal is headed straight into the heart of a dark secret as his search uncovers more startling truths about Promise Falls. And when yet another murder happens, Cal and Barry are both driven to pursue their investigations, no matter where they lead. Evil deeds long thought buried are about to haunt the residents of this town—as the sins of the past and present collide with terrifying results.

I had a little trouble getting into this one - probably because this is actually the second book in a planned trilogy of books all set in the fictional Promise Falls, and I haven't read the first book. For a while I felt a little lost, like I had stumbled into the middle of a story without knowing anything about the beginning or any of the characters. Much like moving into a new community and experiencing a bit of culture shock. But once I got past that, I definitely enjoyed the book.

One of the things I love about Linwood Barclay's writing is that he creates such wonderfully interesting, fully-formed characters. The minor players never come across as interchangeable parts, and even the villains seem like real people. Barclay has a way of creating personalities with just a short description or a few lines of dialogue, while making each one distinct and fascinating. Just like real people, in fact.

Really the only complaint I had about Far From True was that the ending had a bit of a "to be continued" feeling. That's not really a spoiler, since readers know from the get-go that the whole story is going to be spread over three books. And it doesn't mean that the ending wasn't satisfying - because it definitely was. I'm just one of those readers who like everything all tied up neat and tidy at book's end. Not comfortable with cliff-hangers. But now I'm ready for book number three. Oh, and maybe I should go back and take a look at book number one!

(Full disclosure: I received my copy of Far From True free of charge from the publisher, through the NetGalley website. No other compensation was received, and no one tried to influence my opinion.)