Lovely In Her Bones 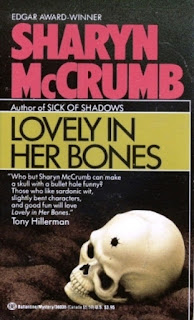 
The amateur sleuth and inquisitive student of life, Elizabeth MacPherson has signed on to an archaeological dig to help determine if an obscure Indian tribe in the North Carolina hills can lay legal claim to the land they live on. Not everyone in the small town is happy about the college project. And some of the residents are downright hostile.

Elizabeth is anxious to prove herself, but the dig nearly stops when their leader, Professor Lerche, is found murdered in his tent. Even mild-mannered Milo, the professor's right-hand man and Elizabeth's secret sweetheart, can't believe the evidence. It takes a second mysterious death to start a cauldron of ideas bubbling in Elizabeth’s head. And when she mixes a little modern know-how with some old-fashioned suspicions, Elizabeth comes up with a batch of answers that surprises even the experts…

Sharyn McCrumb is another one of those authors I've always meant to read, but never managed to get to -- until now. I think Lovely In Her Bones might not have been the best intro to her work, but it jumped out at me at Half Price Books one day. Unfortunately, it didn't inspire me to go on with the series. The central (supposedly, at least) character, Elizabeth MacPherson, just wasn't interesting enough to build a whole series around. And she really only figures in part of the action. Maybe her role gets built up in later books?

But it's a fast read and I did enjoy it. I liked the humor (most whodunnits don't have many laughs), and the fact that it's about archaeologists and set in a dig in the Appalachians. The guilty party was pretty easy to predict, if you were paying attention. And the technology was, of course, very outdated. But I believe I could have overlooked all that if I had just been able to connect a little more with Elizabeth.