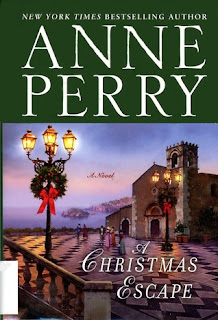 
Lonely Charles Latterly arrives at his small hotel hoping that the island’s blue skies and gentle breezes will brighten his spirits. Unfortunately, there’s no holiday cheer to be found among his fellow guests, who include a pompous novelist, a stuffy colonel, a dangerously ill-matched married couple, and an ailing old man. The one charming exception is orphaned teenager Candace Finbar, who takes Charles under her wing and introduces him to the island’s beauty. But the tranquility of the holiday is swiftly disrupted by a violent quarrel, an unpleasant gentleman’s shocking claims of being stalked, and the ominous stirrings of the local volcano. Then events take an even darker turn: A body is found, and Charles quickly realizes that the killer must be among the group of guests.

Not a great deal to say about this one. A little bit of Christmas in July.

For years now, I've been hearing about Anne Perry's annual Christmas books and they've always sounded very intriguing. A Christmas Escape (set on the Mediterranean island of Stromboli) was my introduction to the series, and it was a happy first experience. I would have been even happier if the mystery had been just a little more — well, mysterious. But even though the whodunnit aspect was less than thrilling, the story in general was charming and held my interest all the way through.

The plot wrapped up a little more quickly than I expected it to, but it's a short book, so I suppose some abruptness is to be expected. Definitely a fast read — I finished in a couple of hours, which is almost unheard of for me. In general, a very pleasant read, and I'll be looking for more of Perry's holiday treats.

(Full Disclosure: I received my copy of A Christmas Escape free of charge, from the publisher, through Library Thing's Early Reviewer program. No other compensation was received, and no one attempted to influence my opinion.)