This week my teaser lines come from Murray Leinster's sci-fi novel, Operation Terror (my "O" book for the A-Z Challenge). I'm not sure of the exact page number because I'm reading this on my iPad, but it's from the third paragraph of Chapter 6 (Kindle location 897-909).

This snippet is describing the mysterious "something" that has come out of Boulder Lake National Park, causing all humans to flee the area:

No human being could endure being within seven miles of whatever it was. . . . because it swung terror beams before it, and terror beams on either side, and when it was clear of the Park it played terror beams behind it, too. Men who suffered the lightest touch of those sweeping beams of terror and anguish moved frantically to avoid having the experience again.

Sounds pretty awful. Reminds me of my old place of employment in Washington DC. 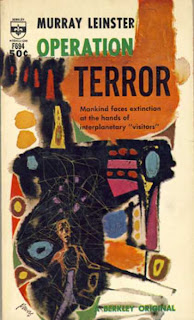 And please feel free to leave me a link to your Teaser Tuesday post in a comment here.
Posted by jlshall at 6:25 AM