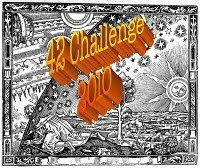 The 2010 edition of the 42 (Sci-Fi) Challenge, hosted by Becky of Becky's Book Reviews, ended back on December 3. This is a fun challenge and even though I didn't do quite as well with this one as I did with the 2009 challenge, I still think it's one of my favorites. This is my list of sci-fi "experiences" for the year. Didn't read as much as I should have - I did a lot more viewing than reading. Still, I'm going to consider it a success, and I want to say a big thank you to Becky for hosting again. Now I just have to decide if I want to try it a third time in 2011.

Here's the list. I didn't do many reviews, but where reviews do exist, I've added a link.