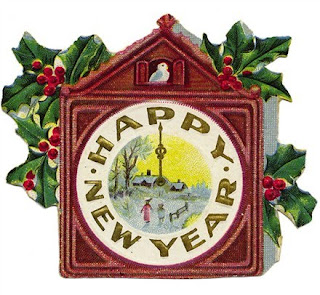 So here we are at the end of another year of reading, reviewing and indulging in bookish things in general. Doesn't seem possible that 2010 is already on its way outta here, does it? I've been blog-hopping yesterday and today, enjoying all the year-end wrap-ups everyone is posting. And it's inspired me to do a little end-of-year summing up of my own. I'd like to write a nice comprehensive and informative piece, on the order of the one my husband recently posted. But I don't see that coming from me, I'm afraid. Well, he's the one with the Ph.D.

In general, I think 2010 was a pretty good year for me, as far as reading goes. My one goal for the year was to read more books than I read in 2009. Well, I didn't quite manage to do that. Once again, my total count was forty-nine books. Don't seem to be able to hit that fifty mark, no matter how hard I try. But at least I keep trying.

My list of books read during the year has its own little blog spot right here. For now I'll just list my favorites of 2010. I was trying for a Top Ten List, but my Library Thing account shows that I gave four-star-ratings to twelve books, so those are the ones listed here. Didn't give anything five stars in 2010, so I guess this wasn't quite as stellar a year as some others (OK - no more lame puns). Here's the list, in alphabetical order by title:

It would be hard to pick one favorite from that group. Several of the authors are new finds for me, and two or three of them are writers I know I'll be seeing more of in the months to come. Of all the books on the list, I think Noah's Compass is the one I'd choose if I were going to reread any of them - I was extremely impressed with the story and with Anne Tyler's writing.

For the new year I have the same goal - to read more books than I read this year - so maybe I'll manage to jump that barrier and make it to fifty books. And I'm adding one more goal for 2011: I'm going to try to be a little more faithful about writing reviews of everything I read - even if it's just to say "I liked this" or "I didn't like this." I started this blog to function as a record of my reading and I think I've been letting that slide a little too much recently. Must do better.

But then tomorrow is another day (yes, Miss Scarlet) and another year, too. Here's wishing you and yours a happy, safe, and healthy 2011, with lots of good books to read and lots of time for reading them.
Posted by jlshall at 4:44 PM